Every year, we’re told of the powers of the latest or newest super foods. We’ve had blueberries, goji berries and green tea, among others. Well, now you can add beetroot to your list.

Favoured by such sporting luminaries as GB Paralympic hero David Weir and packed full of nutritional value, they’re known to aid the liver’s detoxification processes and even suppress some forms of cancer. The purple root vegetable is rich in fibre and so can help your bowel function better, increase your level of antioxidants and white blood cells, and provide a rich source of glutamine, the amino acid essential to the maintenance of your intestine. One shot of beetroot juice alone provides vitamins A, C and K alongside beta carotene, polyphenols, antioxidants and folate, plus other important micronutrients. That’s one shot we wouldn’t mind downing. Put simply: beetroot is a health tonic for digestion, lowering blood pressure, sharpening brain power, increasing energy and even bolstering stamina. Heck, it can even boost your libido.

Not surprisingly, experts have been quick to link its use to improved athletic performance.

For example, in a study conducted by Exeter University in 2011, cyclists who drank beetroot before riding in a simulated competition shaved seconds off their time. The scientists concluded that the effectiveness of beetroot in a competitive environment could be down to the vegetable’s high levels of nitrate juice, which reduces the amount of oxygen required to exercise.

A similar study a year earlier revealed that beetroot juice enhanced performance in endurance athletes while lowering resting blood pressure, and that it could boost exercise time by 16 per cent.

In 2016, Australian researchers tested beetroot juice on six male, and five female international level kayakers, each with a shot of beetroot juice. In lab-based ergometer tests, there was a meaningful performance improvement of 1.7 per cent. Not bad, when you consider the margin for victory between gold and silver in the men’s K1-1000m and women’s K1-500m at London 2012 was between 0.3 and 1.0 per cent respectively.

This year, new studies have suggested beetroot could have a significant impact for those who like HIIT training, as well as elite sports people.

The researchers concluded that beetroot might be ‘ergogenic’, the scientific term for performance enhancing ‘during repeated bouts of short-duration maximal-intensity exercise interspersed with short recovery periods’ — or HIIT for short.

“The nitrate in beetroot seems beneficial for fast-twitch muscles which we use for short bursts of rapid movement, as we do for HIIT training and competitive team sports,” explains Dr Tom Clifford, a scientist at Newcastle University.

“What’s also interesting is that recreational athletes can see bigger benefits from consuming beetroot than those who are at elite levels. In other words, beetroot seem to give the biggest boost to those who need it most,” he says.

“There is new evidence which suggests beetroot could augment some of the physiological adaptations to HIIT workouts. In other words, combining beetroot and HIIT could be useful for anyone who is trying to improve their fitness levels or performance.”

Not only that, but the juice is said to have DOMS-alleviating properties, so actually speeds up the recovery process

Not surprisingly, more and more people are adding beetroot to their daily diets. Olivia Cooney, a personal-trainer to the stars, says: “I advise all my clients to eat something like pre-cooked and infused beetroot as snacks or in a salad, before and after their workouts. There is so much variety, from sweet chilli to balsamic-infused flavours, and from infused to shredded or baby beetroot products.

“When you are starting a new work-out regime, or stepping up to something more strenuous like HIIT, it’s really important to stay motivated, and use anything which lifts performance and reduces muscle soreness afterwards. That’s why beetroot is brilliant.” Brilliant, huh?

So how do you get it… well, you can juice it; combined with apple and carrots, for example, you’ll have a potent juice full of pulp. Be sure to add the stem and greens to boost the nutritional content. The greens themselves are full of calcium, iron and vitamins A and C. You could also add to a salad, too, or even cook on the barbecue. See below…

Okay, it’s time to upgrade your barbecue game with some purple burgers. These colourful alternatives combine superfood ingredients, including chickpea, kale and quinoa, to give you one of your five-a-day. And when served with a mango and spinach salad, you’ll have all the goodness you need, and a tasty treat to boot. And because they’re free from all the unnecessary naughties, you can rest assured your barbecue just got a lot healthier. They’re vegan friendly, and free from the nation’s top 14 allergens, including nuts, soya, gluten and dairy. 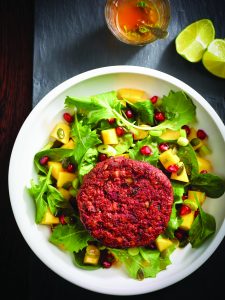 Tags:
Previous Article
THE HEAT IS ON
Next Article
Tough Runner