Ever wondered how Mamma Mia! star Amanda Seyfried maintains her stunning physique and luminous glow? Well it’s not through insane exercise regimes or starvation diets, with the mother-of-one preferring a more balanced and wholesome approach to wellness, writes Simone Lee…

When it comes to celebrity fitness, much of the coverage revolves around how the person in question got fit for a certain role, or nailed that post-baby body, or generally got red-carpet gorgeous. But for Mamma Mia star Amanda Seyfried, fitness is not just important for her work, but her mental wellbeing too. “First and foremost, I do exercise to promote those good vibes,” she says. And that just might explain why her fitness routine is determined, documented and, most importantly, daily!

“It’s just something I crave,” she continues. “It’s the release of stress that I have to feel so that I can get on with the other things, and if I didn’t have exercise, I would definitely be a very different person.

“As for the exercise I do, that’s really down to how I feel and, like everyone else on the planet, how much time I’ve got. So that could be using a skipping rope, a bike, a running machine… anything. And when I’m in the zone, I’m in it… which makes up for the times when I’m not, because that really sucks.” 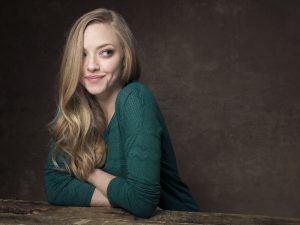 With an impressive career that is still very much on the up, you might assume that the 32-year-old, with her huge green eyes, wide smile and sunny disposition, didn’t have a care in the world. But in fact, Seyfried has struggled with anxiety and OCD issues her entire life, only managing to become the master of her demons in the past few years. “It took me a while to stop denying it,” she says.

“I finally saw that I needed to address my anxiety and stage fright more directly, and that’s been the best thing I could have done for myself. I’m able to enjoy my life much more now although I still worry about things that I shouldn’t worry about. But I also have good friends and a great family who give me a lot of love and support.”

These days, Seyfried is the epitome of calm. By putting fitness and wellbeing at the centre of her life, she manages the stresses of superstardom and the strains of motherhood with complete ease, proving that sometimes being a better person for those around you, requires putting yourself first. For the actress, this usually means running for an hour five times a week, working out three times a week with celebrity trainer Harley Pasternak – often at the Pure Barre gym in New York – before supplementing that physical effort with one or two Pilates sessions at the weekend for the purposes of toning and stretching.

This combination of cardio, strength training, and muscle stretching and lengthening is the secret to Seyfried’s lean, toned and strong physique. But while she reveals that running is great for mental clarity, it is the hardcore sessions with Pasternak that thrill her the most. “Having a good trainer, or any trainer, is really that extra motivation, and that’s so vital. Harvey has been brilliant for me because he provides the plan, the variation and the technical advice, but more than that it’s an appointment that can’t be missed, and being regimented about fitness, for me, is the only way to stay there.”

When it comes to diet, the mother-of-one prefers not to embark on any fad trends… so don’t expect her to be swallowing bowlfuls of cabbage soup or chugging back lemon and maple syrup concoctions, a la Beyoncé, even when preparing for a role. Instead, she maintains a stable, balanced, all-year round food plan, with a diet that is low in fat, nourishing, but by no means restrictive. She eats five times a day – three meals and two snacks – with each meal consisting of five components: a low-fat protein, a healthy carbohydrate, a fibre, healthy fats (or the absence of unhealthy fats) and a sugar-free beverage. 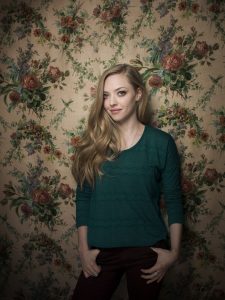 Maintaining a health regime over a period of time is never easy, and Seyfried is refreshingly human in her approach: happily admitting to being a sugar addict and seeing cheat days as an essential part of ensuring sanity. In the mornings she likes to include plenty of raw components in her diet such as a green juice, fresh fruits or a raw smoothie, but prefers to have something more substantial in the afternoon after discovering that a full raw diet was too much to handle.

“I tried it and it just took too much out of me,” she admits. “I would be hungry and tired by mid-afternoon – there just wasn’t enough to see me through. Kale, cucumber, oatmeal, blueberries, seeds, salads, shakes… these are all great, but they just couldn’t sustain me over 24 hours.”

Having struggled with her own confidence issues it should come as no surprise that the Ted 2 star frowns upon the film industry’s fascination with flawless beauty. “It’s not real – nobody is perfect and we shouldn’t pretend it is. What is real is your own body and your own plan.”

Keeping it real in La La Land is no mean feat, which is why when not working she and actor husband Thomas Sadoski are raising their daughter on their farm in the Catskill Mountains, a couple of hours drive from New York City. However, with a career that pulls the talented beauty across the globe with a gruelling schedule and very little sleep, being able to find calm in any situation is vital, which is where the last weapon in Seyfried’s wellness arsenal comes into play: meditation.

“It’s a newer thing for me and I love it – I’m high anxiety so the opportunity to relax my brain as well as motivate my body is a perfect combination. I look at how I was treating myself 10 years ago, even five years ago, and I’m in so much a better place.

“Just step back, reassess, and look after yourself.”