We catch up with Simon early one morning, ahead of a brutal session planned by his PT. He sounds weary, which might have something to do with having just returned from a weekend in Amsterdam, or the prospect of another legs session.

“Everyone hates leg sessions, I know, but I love the feeling afterwards,” he explains. “Anthony Joshua says, ‘Never skip leg day,’ and while you know it’s going to be tough, you just have to crack on. When you’ve done it, you can give yourself a pat on the back. Jack does well to keep me on my toes. My upper body is very strong, so it’s good to work on other areas of my body.”

Simon is now just four weeks away from the end of his 12-week intensive training. In that time, he has to fit in work trips to Bristol, Edinburgh and Kazakhstan, but with the end in sight he remains on target to reach his goals, and shape up not only for the Wolf Run OCR, but also his wedding in June.

“One thing I would say is that if you have a specific goal, get yourself a PT,” he continues. “I have always trained hard, but there is no substitute for having someone pushing you harder. I feel much better but that’s not just down to the training, it’s also down to what I’m eating too.”

“Everything I’ve thrown at him, he’s done well,” explains Jack. “Yeah, he might have a moan when it comes to the leg sessions, but I don’t know many people that enjoy them. They’re really important, though, and he gives me 100%. I can’t ask for any more.” 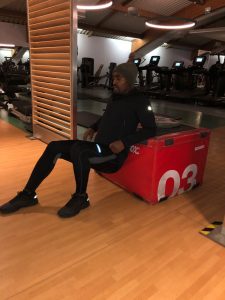 “Arguably the biggest change I’ve had to make in this process is to my diet,” explains Simon. “I’ve always eaten ok, though it can be hard when you’re working into the early hours and need to keep going. I’m now eating a lot of greens. I mean, LOADS of greens! I would always have some veg with my meals, or maybe a bit of avocado, but now I’m eating loads of broccoli and beans, maybe whole avocados instead of half, things like that. They say when it comes to exercise that it’s 90% diet, 10% working out, so I’ve tried really hard to stick to the plan, and I’ve learned a lot about my body as a result. I’ve lost weight, and I’m finding my body is responding to whatever Jack is telling it to do.”

“His body fat will drop now,” says Jack, “and that’s down to a combination of what he’s doing, and what he’s eating. He’ll see more muscle tone, too, and by doing three sets of 10 rather than five sets of five [see workout] he’ll be working muscle endurance, building his strength and toning his muscles. Take a look at his Instagram account (@simonwebbe1) to get an idea of some of the stuff he’s eating. He’s really cut down on the carbs too, but that sometimes means he has to extend his recovery periods because he has less energy. He’s giving 100%, and it’s starting to show.”

Simon’s new nutrition habits involve eating for eight hours of the day, then fasting for the remaining 16. “This keeps him in the fat-burning zone while he’s training,” explains Jack. “It’s all about keeping him in this zone for as long as possible, so quite often he won’t begin his eight-hour feeding session until after his training.”

“It took a bit of time for my body to adjust to that,” explains Simon. “I was tired a lot and I was having to sleep to recover from the workouts. The biggest challenge has been to stop snacking. To begin with, my body craved sugar. It’s supposed to take about four days for that feeling to stop and I suffered from headaches and all sorts, but over time that has gone away. The only snacks I’m having now are Pulsin bars and shakes, and generally I’m eating a lot of fish, greens and a load less carbs.”

It’s been hard,” Simon says of the experience so far. “I’ve had to juggle workouts around work trips and previously arranged weekends away, so some weeks I’ve had to do double sessions to ensure I get the work in.”

“Juggling this kind of intensity around work schedules can be hard,” says Jack. “I want to make sure he has enough rest, but also that he gets everything in the sessions he needs to. Sometimes that means doing double sessions, but he’s coping very well.”

“Booze has also been a tricky one, as I’ve had loads of things going on that involve drink, such as holidays and birthdays,” adds Simon. “However, I’ve stopped drinking as much and when I’ve been DJing, for example, I’ve been swapping booze for water. I don’t need to drink to have a good time and the more I’ve learned about my body, the more I’ve tried to do the right thing.”

“The last stage of this transformation will be about tapering and toning, so really pushing through on the quality of his exercises,” says Jack. “The fat percentage will really start to drop, but he’ll be increasing his strength. Ultimately, we’ll be hoping to achieve his goals thanks to a combination of these workouts alongside his usual boxing sessions.”

“You’ll notice we’re now doing three sets of 10 reps rather than 5 x 5,” explains Jack. “Doing 5 x 5 takes a big toll on the body and Simon’s energy levels were suffering. s strength range is superb, though, so this suits him a lot better. Again, we’re doing three sessions a week and the aim is to work the whole body, and this is how we’re developing his upper body. Simon’s also doing boxing sessions on top of this to work his cardio levels, so choose something that suits you, and which raises your heart rate.”

SNACK ON THE GO

Containing a blend of pea and rice protein to provide all of the essential amino acids your body needs, Pulsin’s Vanilla Choc Chip Protein Booster bar gives you the perfect protein boost for pre or post workout. It also contains Madagascan vanilla and choc chips naturally sweetened with tooth friendly Xylitol (naturally occurring sweetener found in many fruit and vegetables). The high plant-based protein and fibre content can also help keep you feeling fuller for longer and work to keep you energised between meals and on the go. 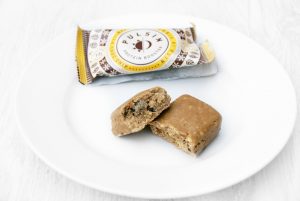 Countdown to the Wolf Run
bfadmin