Laura Crane is a top surfer, model and burgeoning influencer online. Her message is ‘strong, not skinny’, and key to conquering the sea are strong obliques, biceps and triceps…

Laura Crane has been making waves both in and away from the water over the past 12 months. The 22-year-old has legions of followers on Instagram and it’s her prowess in the water, as well as her poise in front of the camera, that makes her one of north Devon’s most popular exports.

Crane moved to the west country at the age of 13 and, just 12 months later, found herself crowned UK champion. She hasn’t looked back since, finishing fifth in the 2013 International Surfing Association European Championship, and catching the eye of some of the world’s biggest sports brands.

Now living in Portugal, Crane has modelled for the likes of Nike, Billabong and Chilli Surfboards. Fresh from a two-year stint in Bali, she’s now intent on promoting a healthy body image to her massive social media audience. 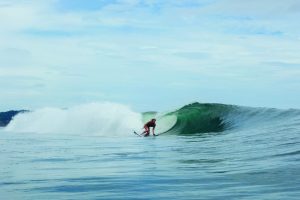 So how did she get from north Devon to here in under a decade?

“Luckily it [surfing] came pretty naturally to me,” she tells BESTFIT. “I swam from a really young age, which definitely helped. I spent a lot of time in the water! I just had a lot of passion for the sport. Without that I would never have progressed so quickly, or still be doing it now for that matter.

“But you’ve got to be in it whole-heartedly. At the time of the 2013 Euros, I was travelling, modelling, blogging and filming whilst trying to be a professional athlete all at the same time. Basically, to be number one, it’s got to be your only commitment.”

As in many sports, a solid core is essential for Crane to maximise her potential on the board and achieve the kind of balance that’s needed to catch waves in the most demanding of sports.

“You need to work on obliques, to get the core really strong,” she says. “And biceps and triceps for all the paddling! It’s also essential to work on having a low centre of gravity for your balance. You can learn this out of the water as well to get started.”

Crane is a creature of habit, going for a walk first thing in the morning to get her mind and body ready for the challenges that lay ahead. It also means she can check out the local surf breaks in what Crane describes as her ‘morning ritual’.

After that, it’s down to the serious business of hitting the water and the gym. 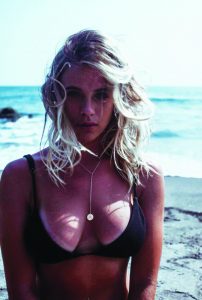 “If the waves are good I could be in the water for up to six hours,” she says. “If they aren’t so good, I’ll still aim to be surfing for at least an hour.

“I like to vary my workouts. If I’m in the gym, I tend to work more specifically on my upper body or legs. I also love HIIT training for core strength and an explosive workout.

“For cardio, I’ll hit the treadmill in the gym. I also walk every morning and obviously paddle a lot in the water! I still love to swim too. With weights, I’ll vary my workouts and use them to tone and strengthen my legs and glutes with plenty of squats.”

The exercise doesn’t stop when Crane is in a hotel, with HITT training, including lots of lunges, squats and mountain climbers, supplementing her activity in and out of the water. Yoga and pilates are also key elements of her regime.

“Your lower back and shoulders can get really stiff and you end up with tight muscles from being in the same position for a long time on the board,” she says. “Yoga is great for loosening everything back up.”

As with any sport, what you put in your body has a massive impact on what you get out, and Crane’s diet ensures that she’s able to maintain the highest possible levels of performance.

And fortunately for her, she currently lives in a country famed for its seafood.

“For breakfast, I usually have eggs or yoghurt with fresh fruit or an acai bowl,” says Crane.

“Lunch is a leafy salad and for dinner, generally fresh fish and vegetables. Fish is pretty much all I eat out here in Portugal. I love salmon and seabass! The sardines here are really great too.”

As well as the fish, Portugal has gradually gained a reputation as Europe’s top surfing destination. Crane names Ribeira De Ilhas in Ericeira, a World Surfing Reserve, as her favourite place to catch a wave.

“For me, Portugal has some of the best waves in Europe, maybe even the world,” she says.

“I’ve found that the waves are the most consistent of any country I’ve surfed in,” he says. “It’s also not too crowded yet, which is nice!”

Aside from the odd cut on the reefs of Bali, Crane has stayed mercifully free of injuries over the course of a career that has now moved well beyond surfing. She is now widely seen as a major influencer on social media, promoting a healthy body image built around the mantra of ‘strong not skinny’. Unsurprisingly, it’s something that she’s keen to continue.

“As an influencer, I try to keep my social media really positive,” she says. “I also wouldn’t like to post about anything that I didn’t believe in myself. I like to give a clear view of what my life is really like.

“For me it’s all about being healthy and happy. I’d like to inspire girls to work hard and to have a body that’s strong and do what they want it to do, not what other people expect it to look like.

“For me it’s massively important. I would like to think I can be an advocate for girls just getting out there and doing great things. I hope through social media, I’m able to inspire people.” 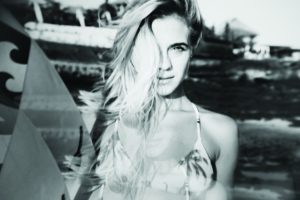 Series 2 of BESTFIT TV is here!