What kind of pressures does being the lead male actor for 50 Shades Darker entail? Jamie Dornan explains 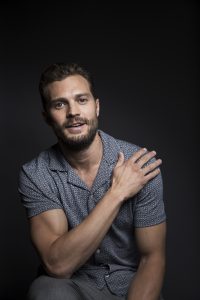 This year, Dornan will return to the screen as the eponymous Christian Grey in the sequel Fifty Shades Darker. Unknown only to those who have been living under a rock these past few years, the role of handsome entrepreneur-cum-BDSM enthusiast Grey has forced Dornan to again (and repeatedly) show off that apparently gilded body. But a build like that does not come easy, and the actor has long struggled with his own uncertainties despite the widespread notion that he possesses one of Hollywood’s finer figures.

“I was always fighting against the feeling that I was skinny and small as a kid,” the 34-year-old reveals. “I still have those same insecurities; when I see an image of myself, all I see is this skinny kid and I don’t like it.”

Even being chosen as one of legendary fashion label Calvin Klein’s male faces – in a series of steamy shoots alongside a scantily clad Eva Mendes, no less – hasn’t helped Dornan’s perception of his alleged physical faults.

“It doesn’t matter how many times someone says you look great, or you have to be filmed with your top off – you still have all these things, all these insecurities, ingrained into you,” he continues. “All the people in the world saying how great you look won’t change that. I’m never going to be happy with the way I look, I don’t think.”

Dornan’s race to overcome his hang-ups and craft a muscular figure worthy of EL James’ ‘whips and chains anti-hero’ was made more difficult by original cast member Charlie Hunnam’s late departure from the film. “I only had four weeks to work out for this role,” Dornan agrees. “I would have liked more time.”

As it was, Dornan decided to eschew traditional weight-based exercises in order to “use his body as a gym” – a phrase coined by his Fifty Shades personal trainer Neil McTeggart. Neil works at the IronFit gym in Dornan’s birthplace of Belfast and was instrumental in turning the “lean, skinny” actor into someone capable of looking good throughout the many up-close and personal scenes the erotically-charged film demanded.

“We’d focus on body weight, and we’d try not to use a lot of equipment,” Neil says. “You take the best bits out of things like yoga, bodybuilding or gymnastics – especially things like climbing ropes and rings. One of the great things about this kind of training is that you can see yourself getting stronger and better over time because you start to notice that you can hold yourself in a position for a lot longer.”

This focus on ‘street training’ was also beneficial to Dornan using his free time on location to top up those famous biceps, or Adonis-like abs, with ad hoc exercises.

“There’s a lot of downtime on sets, and I try to use that to my advantage by working on my arms and core with press-ups and crunches,” Dornan explains. “I do press-ups every single day – that’s what it’s all about. I’ll try to do 50 press-ups first thing, and then more whenever I have time during the day or between takes.”

Recently Dornan reluctantly gave up his passion for playing rugby after a problem with his iliotibial band, found in the inner knee. To make sure he still stays fit without aggravating this underlying injury, Dornan has turned to non-weight bearing workouts instead. “I can’t run on hard ground like I used to,” he admits. “So instead I go swimming as much as I can.”

“Some of the Red Room stuff in the first film was uncomfortable. There were times when Dakota was not wearing much, and I had to do stuff to her that I’d never choose to do to a woman.”

“S&M isn’t my thing. Absolutely, I can understand if people like it and that’s their shout, but it’s each to their own. What is certainly true is that bringing this to the fore takes away a layer of mystery, although I’ve always been a pretty liberal person.”

“I think we’re all fascinating, as humans. There are so many ways in which we express ourselves, both sexually and in everyday life. We should all be proud of that.”

But with Fifty Shades Darker being only the second in EL James’ sexually-charged trilogy, Dornan will no doubt soon be facing up to hitting the gym once more to play the character who, despite making him a household name, will never be one of the actor’s most cherished characters.

“I think it’s fair to say he’s not the sort of bloke I’d get along with!” Dornan laughs.