He’s not ripped like your typical Hollywood action hero, but Ryan Gosling can easily hold his own – as we’re about to find out in the sequel to one of cinema’s most beloved sci-fi films: Blade Runner 2049.

Ryan Gosling is without doubt many things: effortlessly talented, averse to off-screen drama, and currently at the zenith of his Hollywood career. But while he has that difficult-to-pin-down movie star quality that so many lack and has carved out a reputation as cinema’s most wanted leading man after a string of acclaimed performances, he stands somewhat apart from his fellow stars in that most bombastic of film genres – action.

Despite standing at 6’1”, Gosling is neither blessed with the inhumanly bulging biceps of current highest-paid star in cinema – Dwayne Johnson – nor is his lean frame comparable to contemporary Hollywood heavyweights such as Idris Elba, Mark Wahlberg or Hugh Jackman. It’s no surprise really, considering the Ontario-born actor’s opinion of long hours put in at the gym for suitably ripped results.

“Muscles – they’re like pets, basically, and they’re not worth it,” the 36-year-old smiles. “They’re just not worth it. You have to feed them all the time and take care of them and if you don’t they just go away. They run away.” 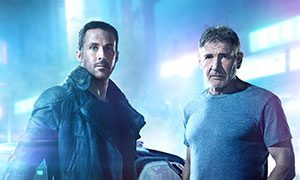 Even though an apparent indifference to fitness hasn’t done Gosling’s career any harm, his languid attitude belies a filmography in which the laid-back star has been suitably, and surprisingly, shredded on-screen. First there was breakthrough crime caper Drive, in which fans were treated to a glimpse of Gosling’s six-pack – “Oh my God, I’m blushing,” he smirks – and then in 2013 came a murky, muscled turn as a Muay Thai boxer in Nicolas Winding Refn’s Only God Forgives.

Following these dalliances with cinema’s stunt-filled side, this year sees Gosling handed the reins to one of the most influential action franchises of all time. Cast as LAPD’s Officer K., an outstanding replicant terminator in Blade Runner 2049 – the Denis Villeneuve-directed sequel to Ridley Scott’s 1982 masterpiece – early images of Gosling appear to point to an actor who once again is hiding an oft-unsuspected physique in order to keep up with the demands of the sci-fi thriller; even if that meant taking a punch to the face from the legendary star of the original Blade Runner, Harrison Ford.

“Will I say it was my fault because my face leaned in a little too close to his fist?” Gosling muses. “It happens. It’s not something I’m ashamed of. If it’s going to happen, let it be delivered by Harrison Ford. It was a privilege.”

Sparring mishaps with icons aside, even the usually un-fazed Gosling is perspiring a little at the thought of following in Ford’s footsteps as the focal point of a film that is perhaps more hotly-anticipated than any other revival in recent memory.

“I am nervous,” he concedes. “I’m always nervous for anything I do; I think it’s healthy to have a healthy quota of anxiety. But this is Blade Runner – there’s a lot of pressure; a lot of expectation. You can’t ignore that completely. Much of that is alleviated by Denis taking this on; he wasn’t fazed by that. And Harrison – you couldn’t do this without him and so with them, I’m not so nervous. It could have been worse. I think there was probably a lot more pressure on Denis. He’s the captain of the ship; I’m only one of the crew.” 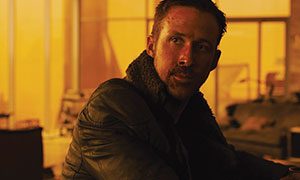 Such humility is typical of Gosling, but there’s little doubt that Blade Runner 2049 represents the pinnacle of his recent career points, and by extension his entire time in the industry. But though most action stars segue from one explosive thriller to another, Gosling preceded this move into sci-fi stunt work with his altogether acclaimed – if not entirely comparable – turn as an all-singing and dancing, piano-whiz jazz musician in Damien Chazelle’s La La Land.

The colossal differences between the singalong-soaked pizzazz of Fifties Los Angeles in La La Land and its gritty 2049 counterpart certainly hint at few similarities between the films, but for the gym-averse Gosling, the skillset he honed for those musical numbers alongside Emma Stone made them a form of high-intensity workout that would stand him in good stead for when Villeneuve and Scott – this time taking a role as executive producer – came calling.

“I love formal dancing,” he nods. “It was one of the first art forms I discovered while I was growing up, thanks to my big sister. I was often the only guy in the dance class with her. One day I would love to sign up for a course again.”

This versatility, Gosling explains, is less due to a dedication manifested in musculature more befitting of the Johnsons and Elbas of the industry, but rather a deep-rooted work ethic that sees the supposedly chilled Canadian commit himself fully to each project he turns his talented hand to.

“All the men in my family worked hard,” he recalls. “My father and uncle worked at a paper mill and I wanted to do everything possible not to have to do that for a living. But I like working hard. I think you sleep more peacefully at night after a good day’s work. Also, when you’re working a lot you don’t have too much time to worry about other things.”

With Blade Runner 2049 likely the most hyped film to hit cinemas this year, the stage looks set for Gosling to add yet more plaudits to his already glittering filmography. Even with his status as the industry’s most unassuming action hero firmly cemented, however, don’t expect to find the star pumping iron with a vengeance in the near future.

“As an actor you have to be able to change. It depends on the role,” he says. “But it does kind of dominate your life, whichever way you’ve got it going. It affects how you feel. I had to put on weight for a movie once and it seemed like a really good idea at the time. I was melting Häagen-Dazs and drinking it when I was thirsty! And that was fun for about a week… but then I started dreaming about salad.” 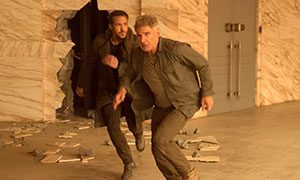