Emma Hyndman started competing four years ago. Last year, she was crowned NABBA World Champion, and visitors to BodyPower will see her in action…

Talk us through your 2016, when you went from competitor to winner… 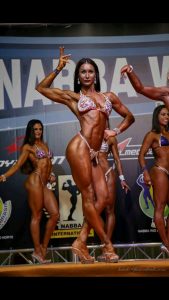 I’ve been competing for four years. I’m a tone figure competitor and I’ve had to really work on my shape, my stage presence and my overall package, and work my way up the ranks. In my third year I had my first win with NABBA UK. After that I went on to win the British title, and was then invited to go to Brazil and represent the British team in the world championship, which I then won.

When I came back the following season I competed with PCA in the toned category, and won their East Coast (Birmingham) show. I was pushing the boundaries of toned figure – obviously the more you train the more you grow and progress and your body changes, so you get to a certain level where if you continue like that you no longer fit the criteria. That’s what happened to me – I outgrew the category.

This year, I’ve taken a step back from the stage and I’m having a ‘normal’ life for a while. That has allowed me to focus
on the flip side of figure, so online coaching, posing coaching, guest posing spots for PCA and with my friend as part of the SASS Squad.

I’ll be at BodyPower doing both.

What does it take to compete and win, and how far removed from normal life have you been?

I’ve missed out and sacrificed a lot of my time. During prep, any time I’m not working I’m training; I’m restricted within my diet and nutrition, which makes it hard to go out in social situations. My friends might be going out for lunch or dinner and if that restaurant doesn’t provide what you need in terms of nutrition (which most of them usually don’t – it can come down to things like what the food is cooked in) then it would affect prep, body and macros. The key to a good prep is structure, and discipline – having the same thing day in, day out – and consistency, which goes alongside food and training. You can’t miss a training session or go out and drink/eat lots unless you’re granted a treat meal, which for some happens on a weekly basis, or when their coach thinks they’re lean enough. It’s all dependent on the individual. You’ll find that most professionals/winners will just hide themselves away – I say to my friends that I’m going into hibernation mode, I can meet them for a black coffee, but that’s about it.

How hard is it to stay true to your plan?

Very hard. I prefer to take myself out of any situation where I may feel tempted. In my first couple of years I’d go out with my friends and say I just wouldn’t drink, but nine times out of 10 there’ll be someone there putting a drink in your hand. “One doesn’t count” – but for me, if you have one you might as well have 10, the approach should be all or nothing. I think the longer you prep, the more your social circle understands and accepts what you do. I’ve got a great group of friends
who understand.

Talk us through your training…

I do cardio every day, usually within the first few hours of waking up. Then I’ll have a high-protein meal, such as an egg white omelette, and I’ll lift weights in the afternoon between clients. That’s pretty much it day in, day out. The closer I get to competition the more strict it gets – I make time to do double cardio and my nutrition is very strict. It’s about sticking to the plan, to what needs to be done even when you’re tired and you don’t want to be in the gym, but you’ve just got to get it done.
I think that’s what separates the weak from the strong.

In terms of weights – what are your essential moves and exercises?

I do a four-day rotation. I’ll train legs twice a week – usually a quad/hamstring workout. The next day, for pull, I might do a shoulder workout, and the day after I’d probably have a rest from weights. Then it would be a back session and then hamstrings/glutes the following day, and then maybe another shoulder session. For me, I maybe train chest every other week, and arms every other week, too.

In the toned category you’re training every muscle in your body, aren’t you?

Yeah, which is a little contradictory to the criteria that says something like ‘athletic physique’ with body fat that isn’t too low; you’re not meant to look like you are too conditioned or dieted. But the reality of it is that you do have to diet down and train like a bodybuilder to create the right shape. Everyone is built athletically, and the criteria is interpreted differently by everyone – they have their own opinions on what the figure should be.

What made you want to compete in the first place?

I danced professionally for 10 years. I’m also a personal trainer, but I got to an age and stage in life where the options were either carry on dancing or push on with personal training a little more. I’d always wanted to compete – I worked in a gym that had some really good bodybuilders in it, they were almost my peers. I looked up to them and thought I want to do that one day.

What was the difference between competing and winning? What took you to the top? 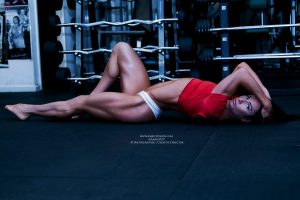 Everyone’s journey is different, and if you want to win you’ve got to have a certain drive and determination and you’ve got to prepare for knocks. It’s really rare that someone will go into this game and win straight away. My journey was three years. I had a long-term goal to be UK champion and it just so happens I got invited to the Worlds. I didn’t expect to make the top three, let alone win. My goal was top six in the world. I worked so hard on what became my craft, so it was inevitable that it would happen eventually. But I do believe you’ve got to have a certain kind of drive. I remember doing my UK competition and that was my third win, and after that, because I’d felt what it was like to win, it made me want to win even more. I remember the first time I felt desperate to win the British title. I wanted to be the best that I could possibly be, and as a bodybuilder that’s something that you’ll always chase. You’ll never be 100% satisfied.

What kind of things do you have to eat during prep and how has that changed now?

I start with moderately high carbs, moderate protein and slightly lower fats. Then, as I come through my prep I’ll taper that down, so the carbs will come down slightly, the protein will increase and the fats will increase ever so slightly. So an average day would be something like: porridge oats and protein; turkey or fish with green vegetables; turkey/fish with sweet potato or rice; turkey and fish with green veg; turkey sweet potato, and an egg white pancake or omelette.

During the off-season, I’m a lot more relaxed with my socialising, so if I know I’m going to go out and be social then I’ll match my nutrition around that. I still do cardio every day in my off-season because I like to eat chocolate! The foundations of my diet don’t change that much, and that is the key to being a good competitor. Your off-season is so relevant. It’s a lifestyle.

So you are NABBA world champion. What are the judges looking for? What makes a champion?

They’re looking for a certain shape and condition – they want a nice healthy look. Stage presentation is really important; if you can pose and look elegant and feminine on stage, and you know what angles work for you, that’s going to make you stand out from the rest. I think what helps me is my dance background, so I have stage presence.

Tags:
Previous Article
IBS could be more common than you think, luckily we have some natural ways to help
Next Article
What are the best foods to eat at what time?

Mr England shares how he prepares for a competition
bfadmin

Giveaway: Win Funkita Activewear Worth Over £100

Mr England shares how he prepares for a competition