Bored with your usual running routes and races? Hit Lonely Planet’s new book for inspiration, and tackle some of the greatest views in the world.

The Big Sur Marathon
California’s ruggedly stunning Highway 1 is a race venue that’s perfect for deep thinking and self reflection – if you can forget about the quad pain, that is.

ORIENTATION
Start // Big Sur, California
End // Carmel, California
Distance // 26.2 miles (42km)
Getting there // Monterey has an airport, but flights are cheaper to San Jose or San Francisco (100 miles and 130 miles; 160 and 210km north, respectively). There are shuttles to the start, from Carmel and Monterey.
When to go // Last Sunday of April.
Where to stay // Big Sur has some of the most beautiful campgrounds in the world, as well as some of the most honeymoon-worthy – and expensive – hotels in the world. More modest B&Bs can be found in Carmel or Monterey.
Things to know // Leave a few days to explore the coastal redwoods, killer restaurants and Monterey Aquarium. 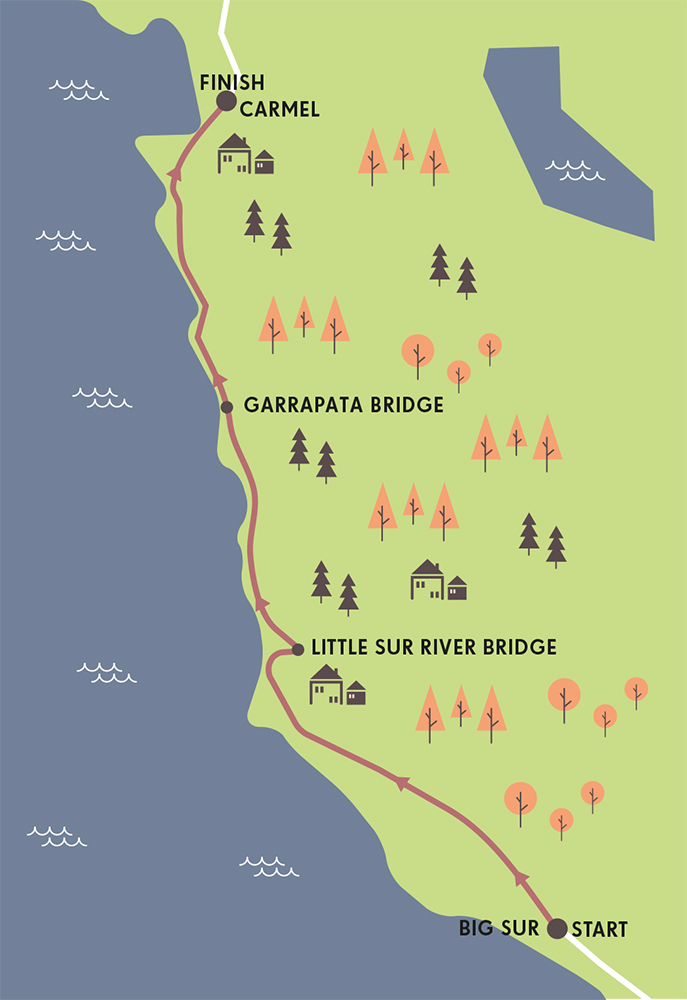 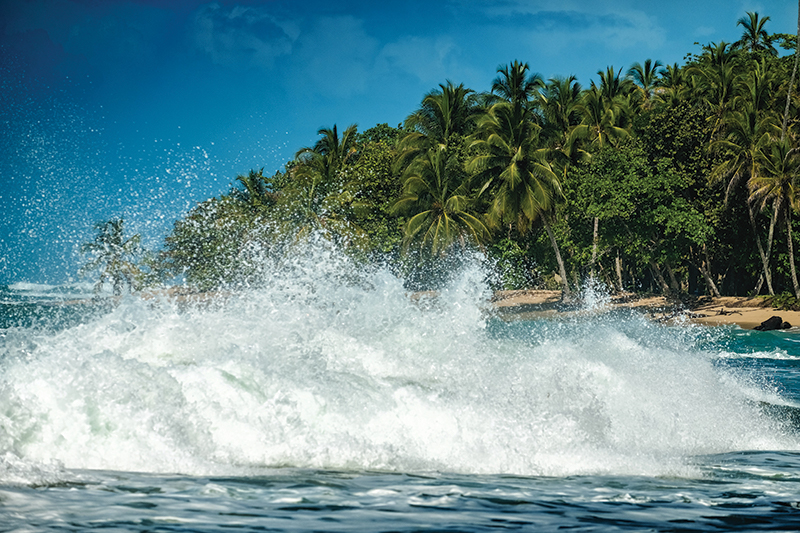 ORIENTATION
Start/End // Cahuita, Costa Rica
Distance // 8 miles (13km)
Getting there // Cahuita is in south-east Costa Rica, a 4.5-hour drive from the international airport at San José. It makes an ideal first stop in the country.
When to go // You can visit year-round, but March/April and September/October are the driest months. In November and December the trail sometimes floods.
Where to stay // Playa Negra Guesthouse (playanegra.cr), where owner Pierre moonlights as a wildlife guide.
Things to know // Keep your eye out for the three-toed sloth, yellow eyelash viper, coati, golden orb weaver spider, blue land crab, poison dart frog, Jesus Christ lizard, iguana, toucan, monkey and caiman that you may meet on your running route. 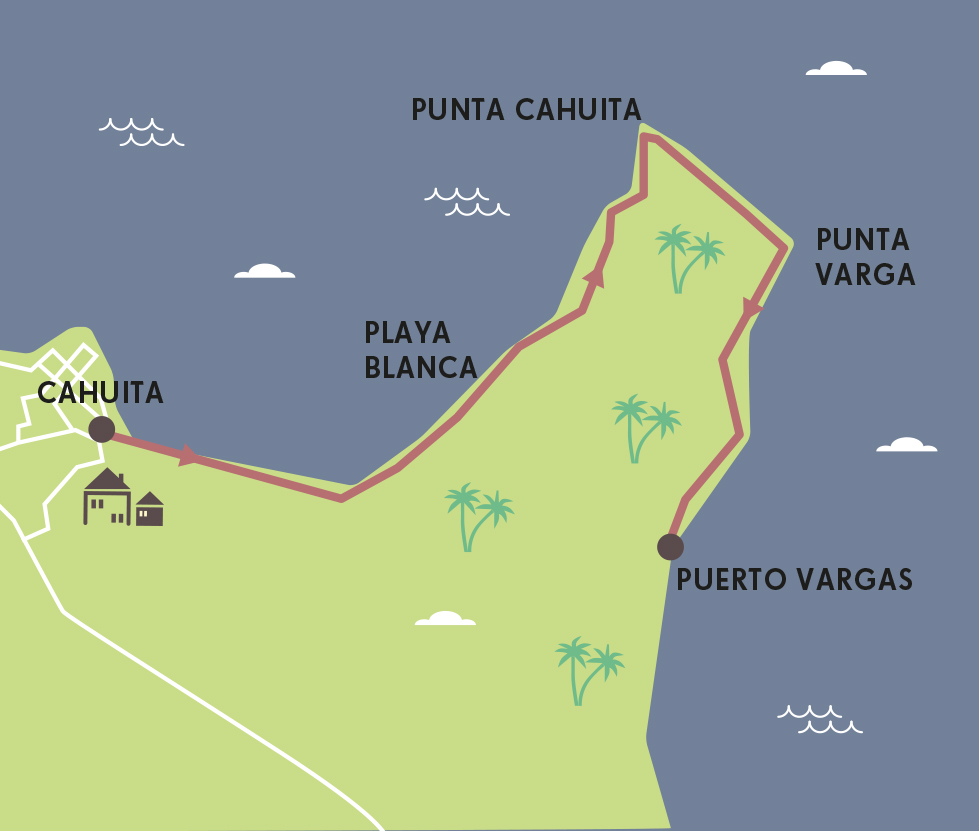 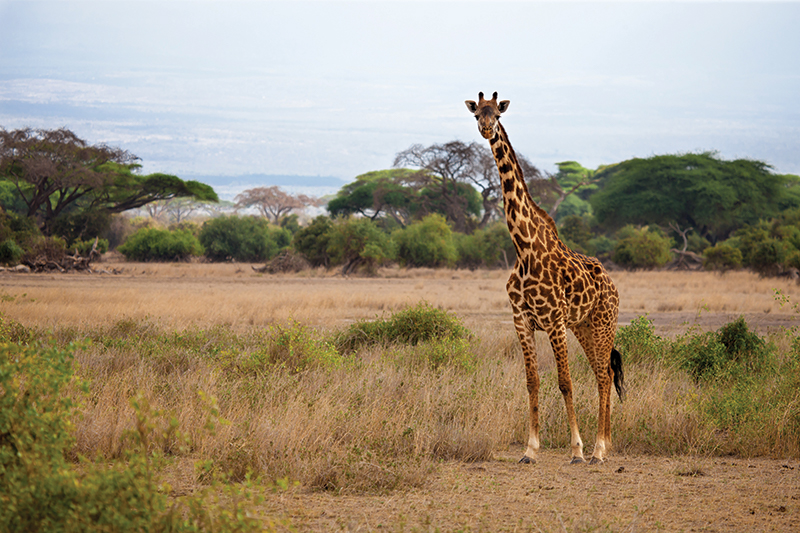 The Safaricom Half Marathon
Who needs a Land Rover when you can race across Kenya’s grasslands on foot, in the name of conservation?

ORIENTATION
Start/End // Lewa Wildlife Conservancy
Distance // 13 miles (21km)
Getting there // Lewa is a four-hour drive, or a 45-minute flight, from Nairobi.
Where to stay // The nine lodges on Lewa usually book up long in advance with corporate groups and the like, but overseas guests stay at Maridadi Camp – an ‘athletes’ village’ with canvas tents and campbeds set up for runners and spectators.
Things to know // Don’t worry, in Lewa’s two decades hosting this race, no one has ever been mauled by a lion. The starting line is kind of disorganised. Runners aren’t stacked according to pace or anything like that, plus it’s a fairly narrow path. So don’t dawdle – weasel your way up close if you want to avoid having to trudge slowly behind the hordes until things thin out. 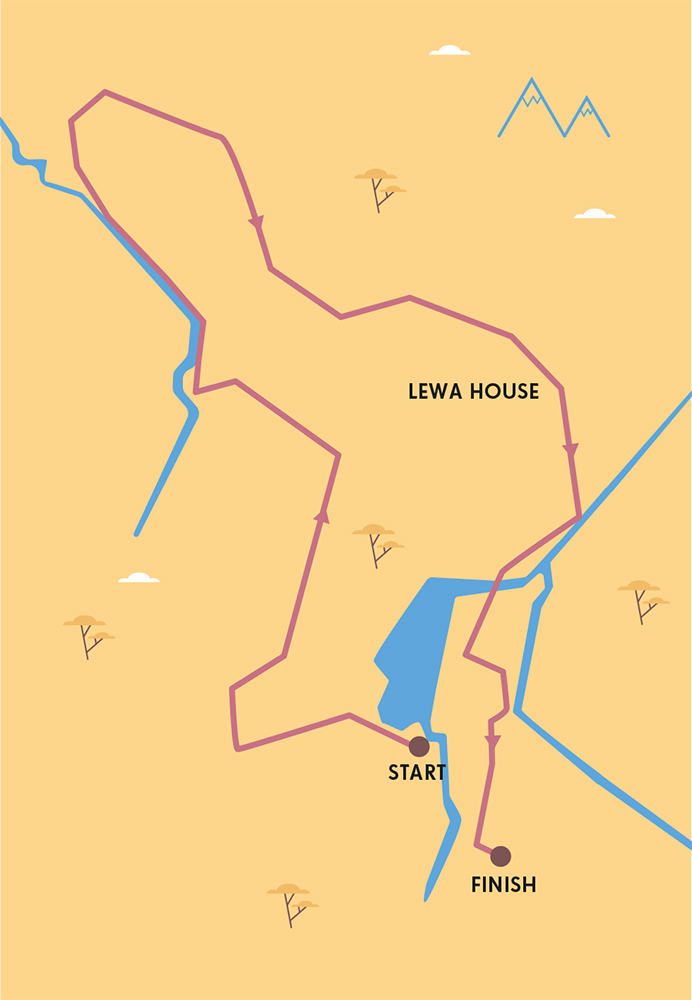 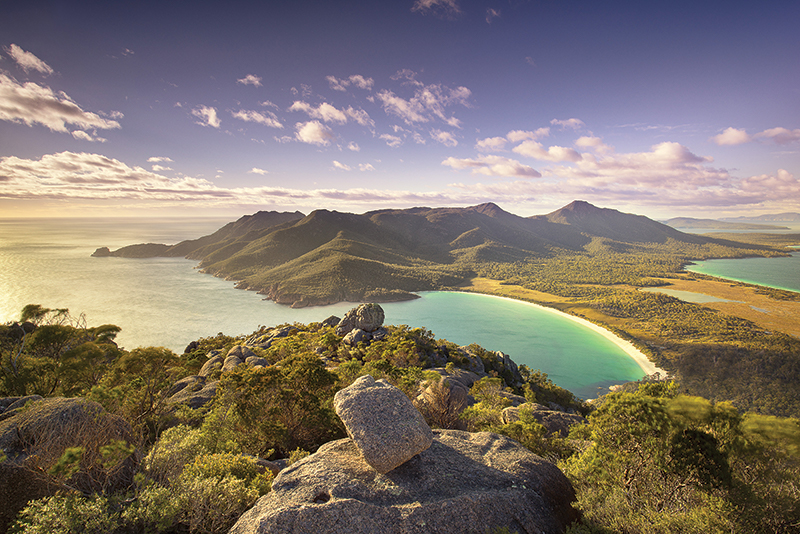 A tour of Tasmania’s Freycinet Peninsula
This devilishly delightful trail run covers it all, from the high ground of the Hazards to the pinot grigio-clear waters of Wineglass Bay.

ORIENTATION
Start/End // Parsons Cove
Distance // 18.6 miles (30km)
Getting there // Coles Bay is 115 miles (186km) north-east of Hobart; 104 miles (167km) south-east of Launceston. From there, continue to Parsons Cove along Honeymoon Bay.
When to go // This trail is doable all year, but conditions on the higher part can be very cold and potentially treacherous in winter (June to August).
Where to stay // The Freycinet Lodge offers four-star cabins in a stunning location. There’s basic, cheap walk-in camping on the shores of Wineglass Bay.
Things to know // Runners, like walkers, are urged to tackle the track anti-clockwise, to help halt the spread of a deadly plant pathogen, Phytophthora (root rot). 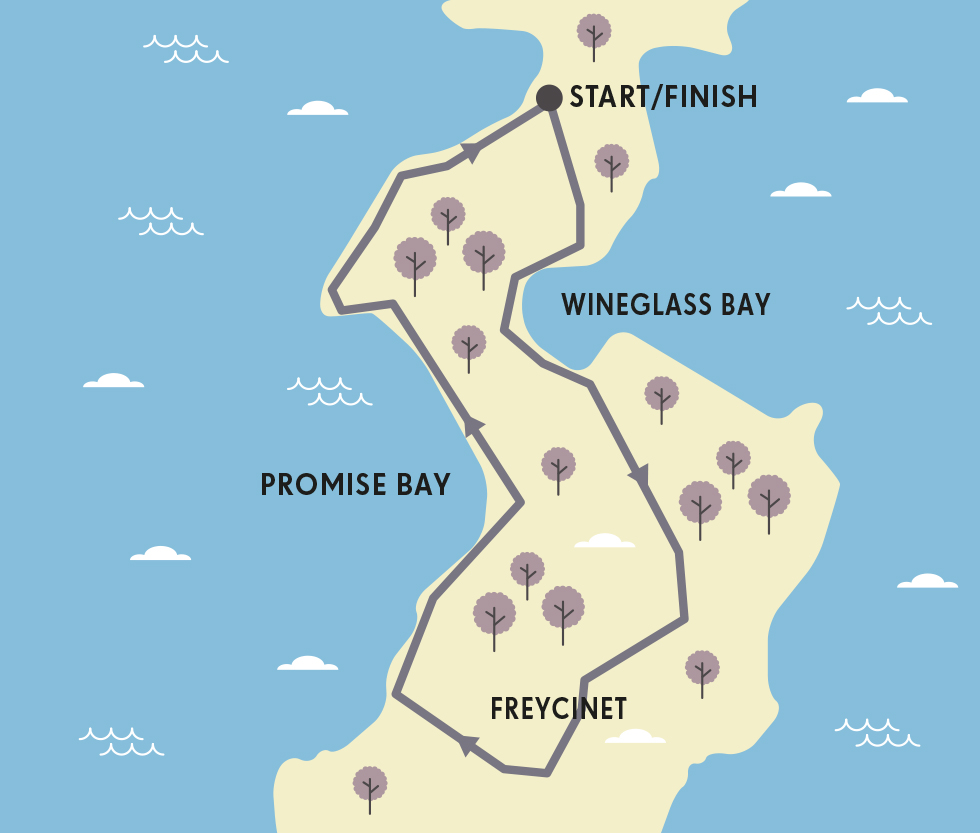 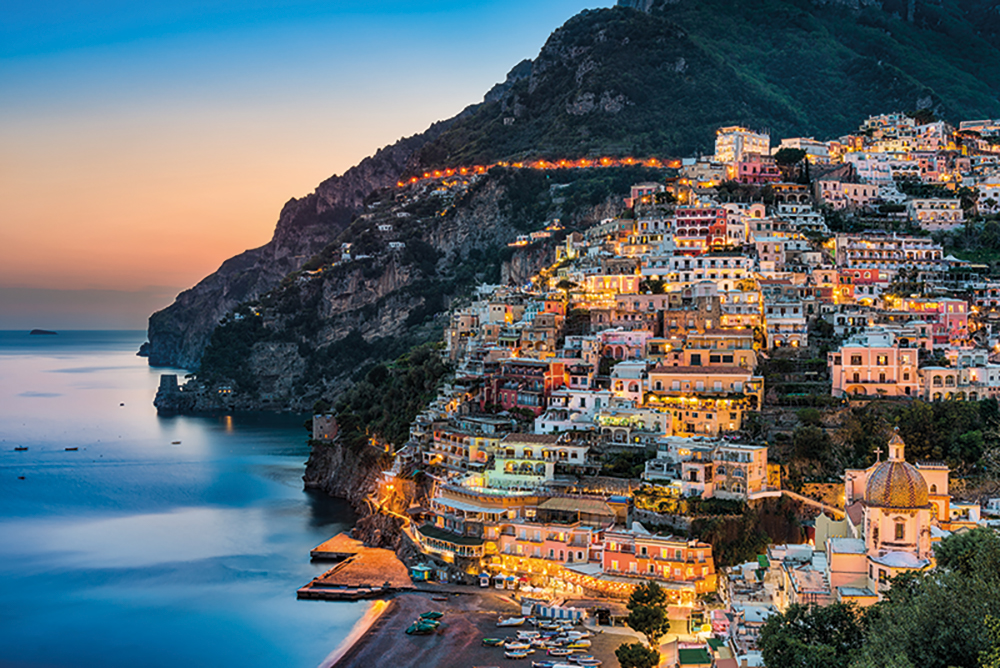 A tightrope run along The Amalfi Coast
Southern Italy’s cliff-side ‘Path of the Gods’ is becoming a trail-running mecca. Bring a head for heights and legs for brutal stair climbs.

ORIENTATION
Start // Bomerano or Praiano
End // Nocelle or Positano
Distance // 4.5 miles (7km)
Getting there // Catch a SITA bus in Amalfi town for Agerola and get off in Bomerano’s main square.
When to go // April to June, or September and October.
Where to stay // Positano is plush but expensive. Agerola and the towns to the east (Minori, Maiori, Cetara) offer better value with no significant drop in quality. Agriturismi (farm-stays) provide a more peaceful rural option.
Things to know // If you’re too tired from all the running, there is a local bus that departs from Nocelle to Positano 10 times a day.

More info // www.caimontilattari.it; the Club Alpino Italiano website (www.cai.it) has maps and descriptions for all Amalfi trails, including the ‘Path of the Gods’. 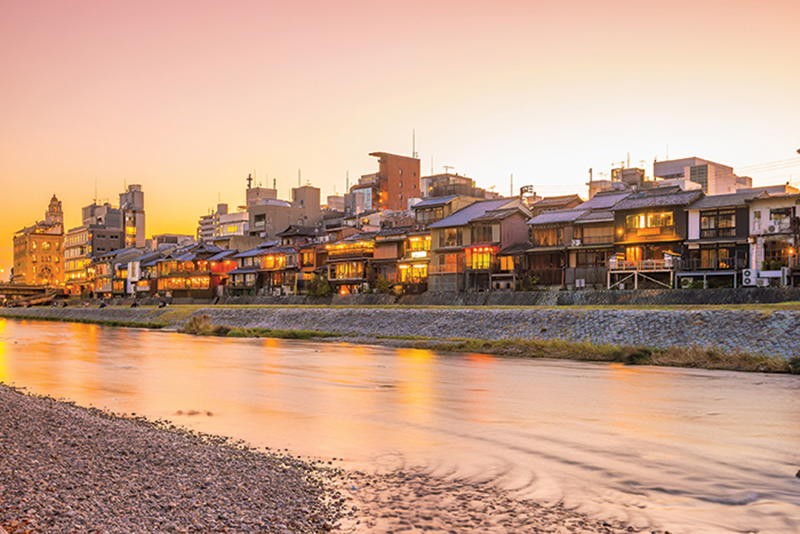 Kyoto’s Kamo Riverfront
An accidental run in the temple capital of Japan uncovers a hidden treasure and reveals an often-ignored slice of real life.

ORIENTATION
Start // Kyoto Station, west of downtown
End // Nishigamo Bridge
Distance // 6 miles (10km)
Getting there // Kyoto has bullet-train connections to Tokyo.
When to go // The river is a popular area for locals for most of the year. But cherry blossom – sakura – season is from the end of March to the middle of April.
Where to stay // Gion is the most picturesque area but the downtown and Kyoto Station areas offer the most hotel options and are also near the river.
Things to know // The paths along the Kamo River are also great for running, cycling or circuit training as there are benches and exercise areas en route. 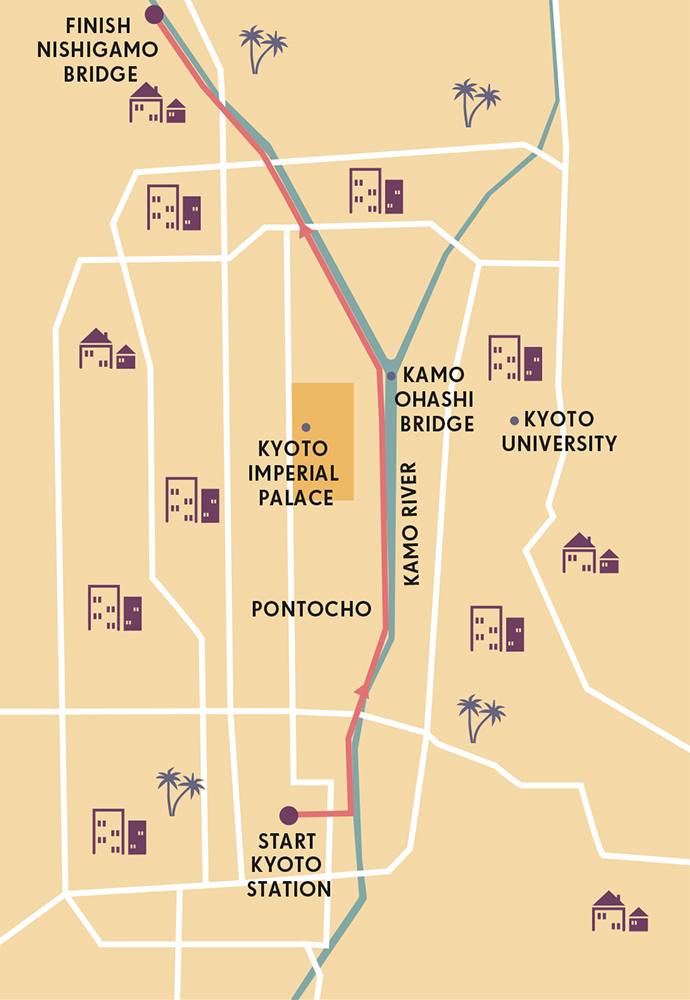 Into the Wild with Markus Torgeby
f