If you’ve dismissed yoga, for whatever reason, you can now try it without leaving the house, and complete a workout in just 20 minutes. Read on…

Yoga is huge. You don’t need us to tell you this. Some people practice it for mindfulness, some for full-on workouts, and others for rehabilitative reasons, or mobility. Yoga is many different things to many different people.

There are still plenty of you however who are yet to try it at all. It might be because you think it involves dark rooms and candles, or perhaps because you’re nervous about trying it for the first time in front of others. Maybe it’s too expensive (many yoga sessions do cost around £10, which is a lot if you’re going to the gym/doing other sports already), or maybe you haven’t got time. Well, these excuses are about to go out of the window.

Alexandra Legouix is a yoga teacher, personal trainer and TV presenter who’s trying to bring yoga to the masses by making it more accessible with a workout consisting of four workouts, each one 20 minutes long. Same as a HIIT session. And we’ve all got time for one of those, right?

IGNORE YOGA AT YOUR PERIL!

“I had previously dismissed yoga,” explains Legouix. “I had trained as a dancer when I was younger and had always considered yoga a bit slow, a bit boring. This was without actually trying it, of course.

“However, when I did try it, I got really into it. Six months after trying yoga for the first time, I went to India to do an intensive six-week training course, which was incredible. The difference it has made to my back…
I have even been able to return to the gym to work alongside a medical PT.”

Alexandra’s route into yoga was very much a rehabilitative one, but which has since taken a different journey, thanks to the many benefits she has found. “Yoga has been a huge help for me, because I have had a string of conditions,” she explains.

“Growing up, I had a lot of bone problems. I had a prolapsed disc aged eight, and again at 16, as well as two benign tumours in both ankles. I’ve had operations on everything. At that time, I was riding and exercising, but these issues were huge hindrances throughout my teen years. Operations helped my back and my ankles, but both degenerated over the years. Basically, my body broke very easily.

“Then, a few years ago, a relatively innocuous fall whilst dancing actually resulted in a broken spine, severely dislocated pelvis and three prolapsed discs that were pressing hard on the spinal cord. My whole body went to pieces! After a week of scans, it was revealed I had a degenerative disc disease, which was the cause of everything. At this time, I was doing a fair bit of personal training, and boxing, and I was told to stop all of it. So, I had to find a way of keeping strong, but which eliminated the risk of impact.
That was when I tried yoga…”

YOGA CAN BE AS TOUGH AS YOU WANT IT TO BE

Yoga is growing in popularity because more and more people are realising the benefits, and the various different forms. If you want a relaxing session then you can, but yoga can also prove a solid workout replacement.

“It can be really tough depending on what class you’re in,” continues Legouix. “It can be a full-body workout and as fitness-based as you want it. It can also help you mentally. For me, it has helped me with my mindfulness, and being in the moment. Mindfulness is something you’re probably hearing a lot of right now and that’s really good news. I hope it’s not just a phase, because I find it unreal that people would have dismissed the importance of mindfulness even as recently as one or two years ago. Being mindful is just an excellent way to live your life in a really positive way.

“People who are practising mindfulness are shouting louder about it than ever, and social media is giving people more access to those practising it so they can see the benefits. This is a positive thing, because mindfulness is normal. More and more men are practising yoga and mindfulness too, and that’s amazing.”

20 MINUTES TO A BETTER YOU

So, you’ve not been before, Legouix’s workouts are a good starting point.
You can practice it in your own home, but also try different variations depending on your desired outcome.

“I’m looking to target beginners, or those who might have suffered from any form of degenerative condition throughout their lives. To do so, I have assembled four workouts that look to improve your core strength, principally the back.  My four 20-minute workouts focus on four areas: stretching, core, energy and relaxation. You can do all four and link them together, or pick and choose. If you want a more intense workout, for example, then the energetic one is perfect.

“These workouts will appeal if you need a bit more confidence before you go to a class, or if you’re into the fitness side of yoga rather than relaxation. I have introduced elements of the spiritual side, so mindfulness and breathing, but I’m trying to make yoga more accessible to those less interested in that side of it.”

Of course, once you’ve tried it, and enjoyed it, then a world of yoga is open for your perusal. You’ll find sessions everywhere, including your local David Lloyd gym (of course). 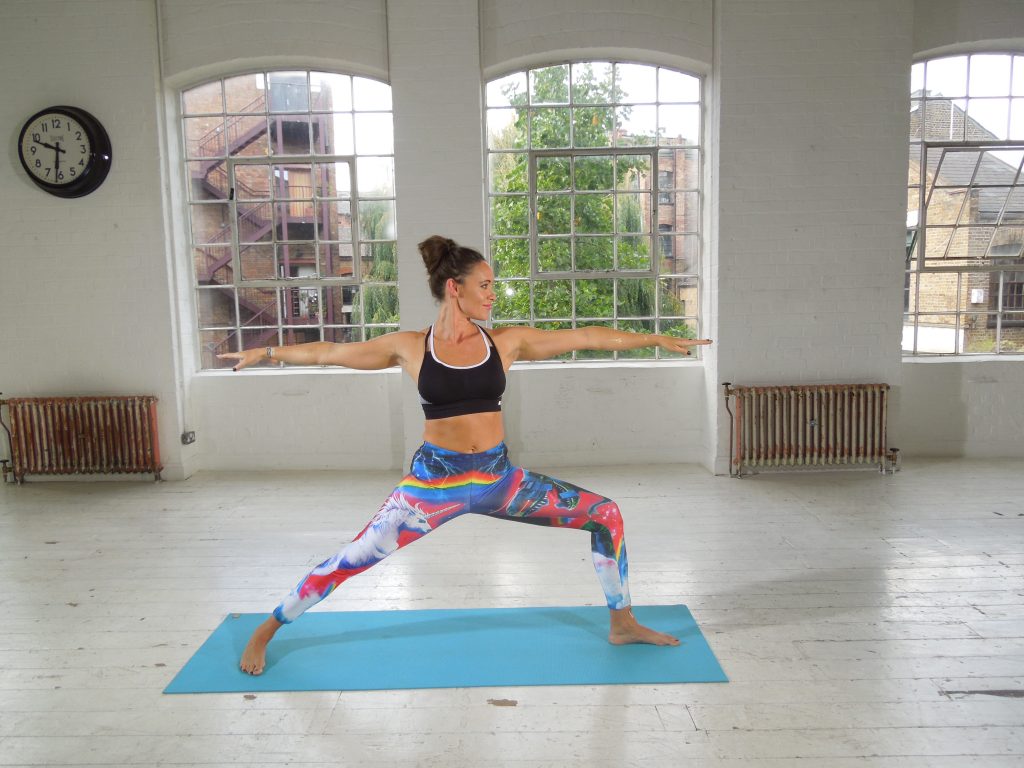 So, are you in? If you’re up for trying it, then it’s time to learn the lingo, and two of the most effective poses.

“Warrior 2 is one of the core yoga poses (pictured above). It’s about having a very solid foundation but with a focussed top half as well. It’s harder than it looks! It feels very strong, and how I imagine a warrior pose should look and feel. From this pose, you can do a lot, and flow into many other different positions. You will feel it in your quads, your core and all across your upper body.

“The Vriksasana, or tree pose, is all about being rooted and having a strong foundation. You’ll all know this one. You bring one foot below the knee or, if you can, above the knee and inside the thigh of your other leg. This pose will bring poise, plus a physical and mental steadiness. I feel very calm when I’m doing it, rooted, which is the point. I love it.” 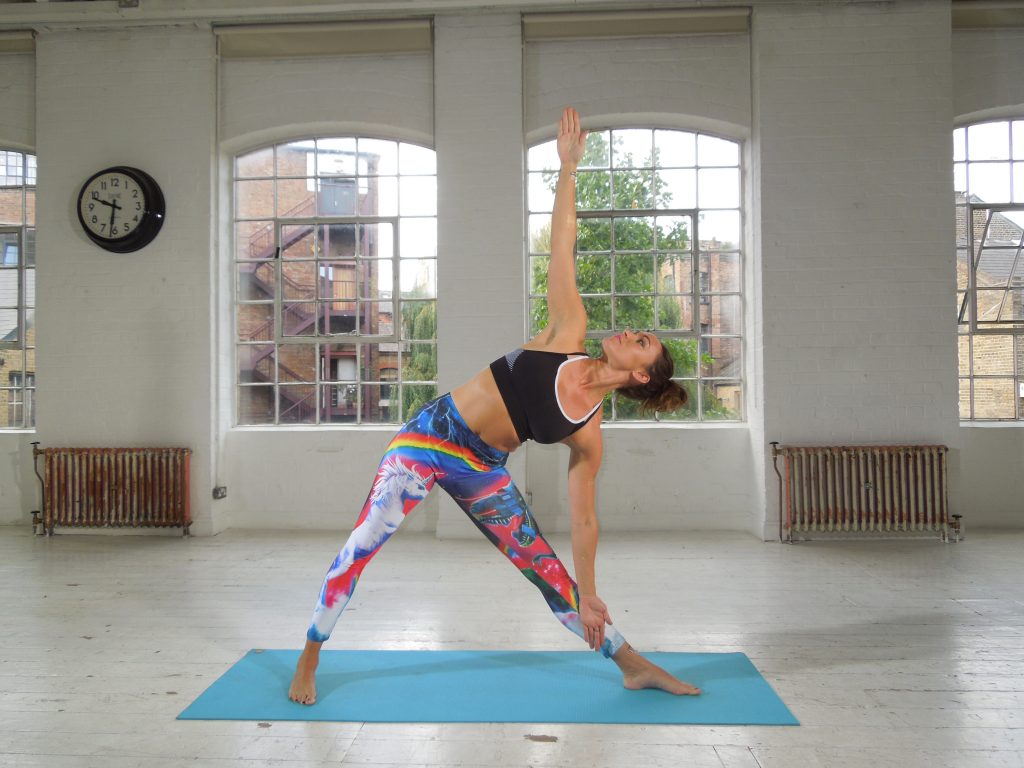 Yoga Made Simple; For Beginners & Improvers by Alexandra Legouix is now available from stores and online.

Tags:
Previous Article
Why is nutrition so complicated?
Next Article
REBOOT IN PARADISE

Yoga: Fills your Bucket of Hope

Alexandra Legouix: Confessions from the Mat

Yoga will change your life: fact!