RUTH GARBUTT STARTED A TRANSFORMATION PROCESS TO HELP HER FEEL BETTER ABOUT HER BODY. TWELVE WEEKS ON, AND SHE’S REACHED THE END, AND SHE’S PLEASED WITH WHAT SHE SEES AND FEELS…

“I don’t miss it at all!” laughs Ruth Garbutt, who has now come to the end of her 12-week transformation. And yet while she laughs at her own initial response at coming to the finishing of the process, she’s far more positive about the overall effect.

Those of you who have been following Ruth’s progress in this magazine or by watching BESTFIT TV will know she had one goal: to lose 10kg in 12 weeks, and to feel confident about her body after having had two children.

“You know what? I actually lost 7kg, which is less than I wanted at the start of all this, but I’m really happy with it. I think that’s the most important thing I’ve learned in this process, that things change, and that as you learn more, your goals might change too, and that’s ok.”

Ruth went big in her first four weeks in an effort to boost her results. As a result, she got ill, which hampered her training. And in the last phase of her transformation, eh obtained a shoulder injury, which prevented her from training her upper body. She’s learned a lot from that, but more importantly she’s now reaping the rewards of 12 weeks of hard graft.

“I could notice the difference in the shape of my body as I was going along thanks to the Shapewatch app, although there was a lot of times when I thought I should have been losing more. Yet I really noticed the difference in week 10, when my old clothes started fitting,” explains Ruth. “There were times throughout the process when I my results should be better, times when I wasn’t trusting the process. However, by week 10 the results were really prominent. My old clothes started fitting and I actually needed more smaller clothes, which was brilliant. That, for me, is what it ‘s all about. I’m now training a lot since the transformation ended but I’m not looking at my weight. It’s more about how I like and feel, getting rock hard!”

“I actually really enjoyed the last four weeks even though they were supposed to be the hardest,” she explains. “The weights increased but that’s the way I’ve always trained, so I was comfortable with that. I used to love pushing myself on the squat rack, and so having to life heavier was good fun for me. There were also other things that made life easier. I like to train on my own and at the start of the process I found it hard having people watching over me, and having to share my journey in the magazine and on social media. By stage 3, I was doing watt bike sessions on my own, and training more on my own… and while I continue to use a PT twice a week now, I love having that mix. I use a PT to push me, and then train on my own to have me time. It’s a perfect mix.

“I found the first four weeks the hardest of them all,” she explains. “I really enjoyed it all at first, but I felt under pressure to lose the weight and put myself under unnecessary stress. In the last four weeks, I had more knowledge about the training, the nutrition, the process. I made myself more accountable. I knew I could take a day off if I wanted to, that it wouldn’t ruin anything, but that if I did that, I would need to stay active and keep the calories off.”

“I haven’t stopped training, but the intensity has changed. Yet that doesn’t mean my fitness journey is over, far from it. When you take on a 12-week transformation you know that it’s going to be extreme. I was training every day, spending four days on the weights, three doing physio and constantly staying active to try and kill the calories. It was hardcore. I had to sacrifice a lot of time, time with my husband and family. My husband is an athlete and het gets it, so he gave me the freedom to do what I needed to do and that acted as extra motivation. When you can on something like this it’s hard, but you’ve just got to do it.

“Now, a typical session is shorter, maybe less intense, but still good enough. A typical session is now 50 minutes long. I might do a 1k watt bike challenge, maybe spend 20 minutes on the bike and then spend 30 minutes doing weights. That’s enough for me now. And when I’m not training, I’m always active. I’m active with my kids and my family. Having a family is tiring and so I can’t expect to train at the same intensity as I did over those 12 weeks all the time. You’ve got to do what you gotta do to match your lifestyle, or it’s not sustainable. Now, I might still go to the gym every day, but it might involve a yoga session, or a stretch…I know my body and what it needs, and this transformation has armed me with that knowledge.”

“I found the supplements so useful in the 12 weeks, but I’m already continuing to use them now it’s over. The Cellucor® C4® Sport really helps me get to the gym, and through whatever session I choose, when I’m not feeling at my peak. Being a mum, I’m tired. A lot. And so for those days when I’m not firing on all cylinders, it helps me train. That in itself acts as a good motivator because I know I can still train even when I don’t feel like it.

“And I made no secret of my admiration for the Xtend® Hydrasport™ BCAAs. It really helped me when I was experiencing sugar cravings, and it kept me hydrated when I was really pushing myself. We now make sure we always have that in our cupboard, for both my husband and I; it’s part of the family now! I might not be training to the same intensity, but I will still use it.”

During the 12-week transformation, Ruth’s meals were supplied by Lean Lunch. Prepping food takes time, so how has she found that since her transformation finished?

“That’s been easy, to be honest. Look, I might not have the time or the space in my fridge to include all the ingredients I was eating, but I’m eating well, and will continue to do so. My husband is an athlete, so we’ve always eaten well, that’s just how our home operates. I’ve learned a lot about what my body needs to fuel itself and so I’m eating slightly differently and prepping when I can, but it’s hard to do those things with a family. I’m definitely not as strict as I was in those 12 weeks but I eat clean and prepared food six days a week, giving me a day to maybe have a cheat meal or a treat with the kids. We’re never going to be that family that has fried fast food. A treat to us might be a Nandos with chicken and hummus, we just don’t do the pigging out thing. Even Easter came and went without too much chocolate. Wine. Wine has been my only downfall. I avoided it for most of the 12 weeks, maybe falling off the wagon one weekend, but I felt so bad after only about five drinks that it put me off! That said, wine was the first thing that came back into my life when the transformation finished. That’s my vice.”

“From the first time I used Shapewatch, I loved being able to see the and monitor the shape of my body. In the app, you start with an avatar of your body shape. You can really see your body in front of you, not in the mirror or in a picture, but a proper image of your shape. And that shape, over time, changes. You can see the change, and that’s the biggest motivator of them all. It’s like watching your body improve in real time. It’s not just about numbers, weight loss and measurements, it’s more than that, and for women that’s really important. Numbers can be stressful and daunting, I know that first hand.”

“You don’t want to be measuring yourself and weighting yourself, and feeling that disappointment if those numbers don’t match your expectations. I loved the fact that you can see your evolution, it simplifies the numbers. Knowing you’ve lost 10cm off your waist, that was my biggest thing. To lose the baby fat, to feel healthier and to know that what you’re doing is working was so important.”

So, you’ve read and seen Ruth’s journey. Should you follow her lead?

“I recommend anyone to do a challenge like this, whatever stage of life you’re at. My best advice would be in that first two weeks to trust the process and don’t stress about the numbers so much. I went too hard at first and was run down, trained too much and became sick. I learned the hard way! But I wouldn’t change it because I’m now as close to the body I want, and I’ve reached this point because of the transformation. Just give yourself the time to evolve, don’t worry about it.” 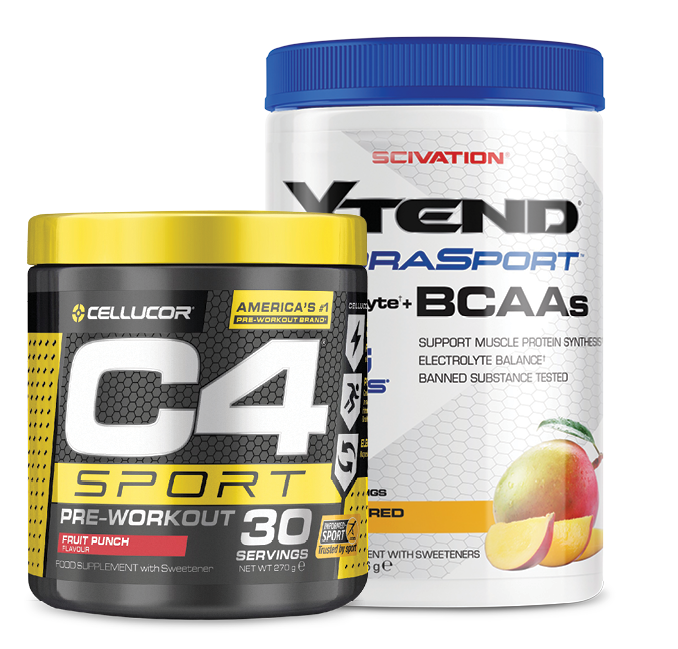 “She had this throughout a hard day to top up her electrolytes and to maintain her hydration levels. She’s not a huge fan of drinking water and because these are flavoured, they helped her get what she needed. These are really handy because she was in a calorific deficit, and so the BCAAs increased her protein synthesis, which increases the wastage on the muscle. She found these really aided her recovery, and cured her sweet tooth fix!”

“Ruth didn’t use the C4 Pre-Workout every day, but if she was struggling for energy she can take this 45 minutes before a session and that will help push her through her sessions,” adds Adam.