ROBYN RIHANNA FENTY IS A ROLE MODEL, A RISK TAKER AND ONE OF THE MOST RECOGNISABLE FACES ON THE PLANET. HERE, WE DELVE INTO WHAT MAKES HER TICK, AND GAIN AN INSIGHT INTO HOW SHE STAYS ON TOP OF HER GAME

MUSIC MAESTRO, STYLE SYMBOL, A-LIST ACTRESS – RIHANNA’S BREATHLESS SWEEP OF INFLUENCE ACROSS MODERN CULTURE ULTIMATELY COMES DOWN TO THE POWER AND POSITIVITY SHE HAS ALWAYS ATTACHED TO HER BRAND.

Yet turning 30 at the start of 2018 did perhaps soften a little the punchy, carefree demeanour of the Barbadian-born actress (even if her Bad Gal moniker remains). Entering a fourth decade was a milestone she celebrated not by getting engaged, nor announcing a pregnancy or embarking on another new career direction… instead, she made a pledge to strengthen her own steely grip on the promotion and empowerment of modern women the world over.

And to do that she’s in the perfect position – after all, Rihanna’s star has never been higher. Her last studio album, Anti, saw the singer soar to the top of the charts again, with over a million copies sold on the first day of release. Critics described the new record as unapologetic and with an uncompromising attitude – much like her, a thoroughly independent and non-conformist kind of woman. 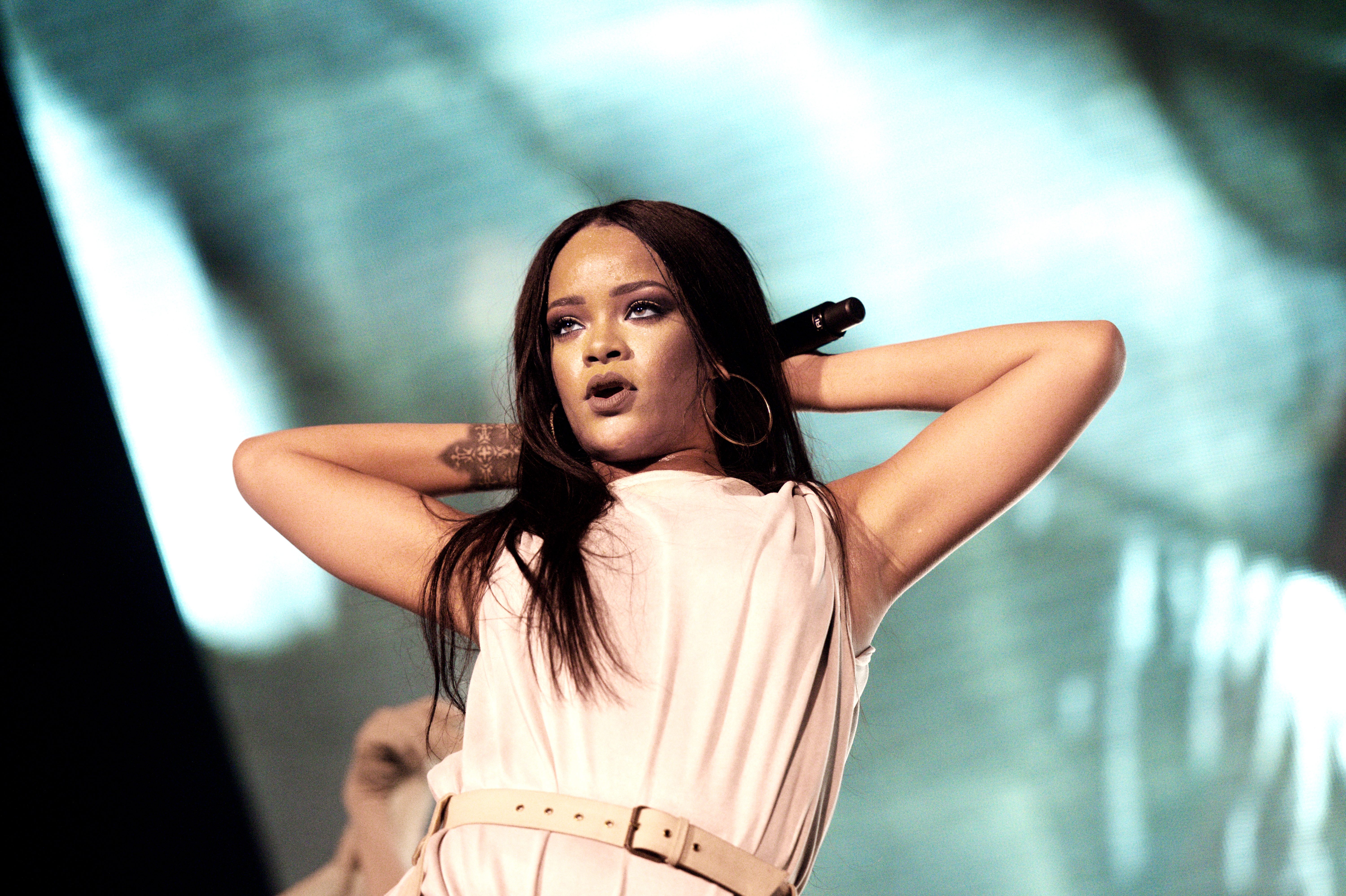 “I like to take risks,” she begins. “I don’t want to put something out that doesn’t excite me because I want the public to be excited, too. In whatever art I invest in, it has to really thrill me from the inside, otherwise how can I expect it to thrill others?”

As a singer, Rihanna’s cool mystique and sassy attitude has always been a major source of her appeal. Along the way, she’s won nine Grammys, sold over 230 million records, and ranks among the top digital-selling artists of all time. She is a sounding board and a role model for the ambitions of billions, without the ego that accompanies so many others in her position.

Rihanna’s attitude to fitness has always been clear – she views it as the basis upon which all her creative projects are constructed. While her rock-hard abs have become a thing of global fascination, she’s not someone obsessed with hard workouts, and believes better in the benefits of mixing up fitness routines with dance programmes, calisthenics and even martial arts. This diverse approach to health allows for flexibility, something that’s vital for someone so frequently on the go and on the road.

“It is flattering when people use the phrase, but I don’t think of myself as a role model, even if I certainly had two incredible forces around me when growing up – my mother and my grandmother. Now they truly are examples of very strong women who inspired me; they’ve helped give me the determination to work hard and build my career. They raised me to be a strong and confident woman and I was lucky to have been educated by them.

“Now it’s about women and girls in general – it’s all moved on to be a much more public debate these days, and that’s good. We’re at the point now where I think the accomplishments that women are making are real and so powerful. We’ve come a long way, and everything is possible. Every goal is within our reach.”

Rihanna is about as real as they come when it comes to ambition – you only have to look at her movie choices to realise that. She has switched from comic book sci-fi (Valerian and the City of a Thousand Planets), to the more recent comedy heist Ocean’s 8, in which she co-starred alongside Cate Blanchett and Sandra Bullock. She’s also busy with the launch of her lingerie line, Savage x Fenty, as well as overseeing the continued success of her makeup collection, Fenty Beauty.

Yet to be able to move forward is only possible for Rihanna when she draws a line under the past, whether the experiences are good or bad.

“I feel I’m constantly evolving and I’m a very different woman from who I was even three or four years ago.

“Sometimes when I look back at my work, even my most successful songs, I don’t feel a strong connection to them. It’s like they don’t reflect who I am today. But rather than worry about that legacy I just switch it around to inspire me to change my output in future, and we should all do that.

“It always all comes back to being thrilled at creativity and ambition,” she adds. “That applies to music and film, as well as to clothes, my tattoos, and my hairstyle. I like the feeling of going my own way and exploring different things… indulging my creative instincts, getting to see the world, experience as much as I can from life. And a little rebelliousness never hurts!

“But what I will always say is, hey, this is real life. If you think that you have to be number one all the time you are setting yourself up to be disappointed – you can’t always expect to be at the top.”

Currently single having broken up with billionaire Saudi boyfriend Hassan Jameel in May, Rihanna famously declared to the New York Times that she can’t devote the kind of attention that would enable her to have a relationship at this stage in her life: “Guys need attention. They need that nourishment, that little stroke of the ego that gets them by every now and then. I’ll give it to my family, I’ll give it to my work — but I will not give it to a man right now.”

It follows then, that at the heart of what Rihanna preaches is a love of oneself. “Respect ourselves then others will too,” she reasons. “There are so many clashing and colliding influences in the world today, but the very first thing we must listen to is what comes out from the heart, and if that is good and positive then you have not only a platform for everything else, but a way to protect yourself from pretty much anything life can throw at you as well.” 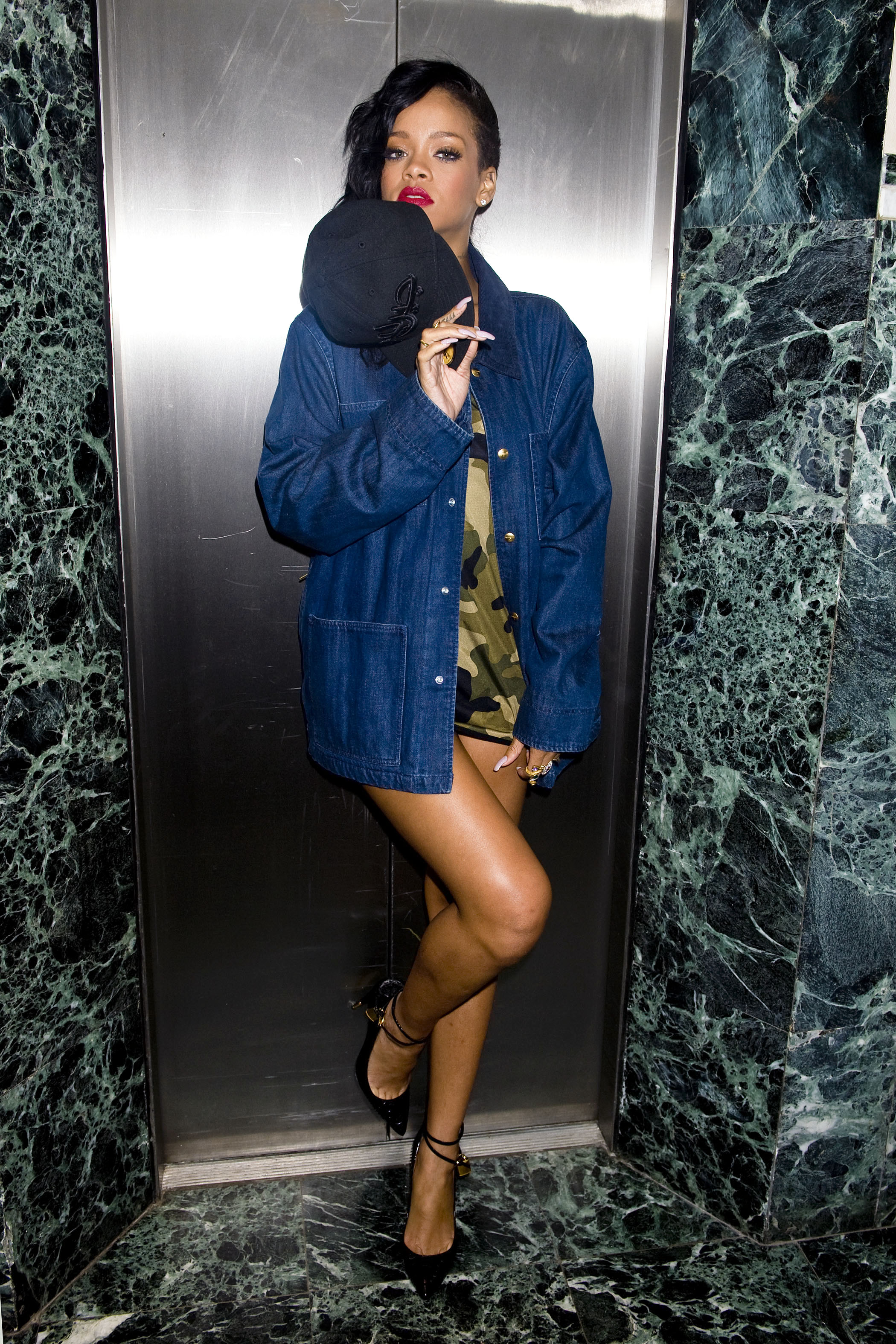 Rihanna believes physical empowerment of women has to start with the idea of celebrating curves, shapes and lines, not hiding them as we might have done in the past. With that goal in mind, her personal trainer Dede Lagree has revealed a simple home workout – after all, none of us can make it to the gym every day.

It’s a routine that Rihanna used to get back in shape after spells away from the gym. It’s simple but severe, toning fat whilst emphasising natural mass; all the time accentuating the legs, bottom and abs, as a celebration of the female form.

Do one set of each exercise listed below. Take little rest as you transition between exercises.

Take 90 seconds to two minutes of rest in between each round.

Complete a total of four rounds.

Rihannas 10 tracks to live by

BARRINGTON LEVY – UNDER ME SENSI

MICHAEL BOLTON –  SAID I LOVED YOU BUT I LIED

Tags:
Previous Article
SUPER SIZE YOUR PRESS-UPS
Next Article
News: Get the Massage

Why You Should Listen to Music While Working Out
BESTFIT

Why You Should Listen to Music While Working Out