Adventure Features Out and About
Tags: obstacle course race, OCR, out and about, Tough Mudder

Tough Mudder continues to blaze a trail in the world of Obstacle Course Racing. BESTFIT sent two team members along to get wet and dirty…

As our intrepid group of four stood at the start line waiting to embark on our first ever Tough Mudder, in what should be noted as pretty dry conditions, we couldn’t have envisaged just how correct the guy at the start line would be.

As I write this, two days after the event (and still aching, though at least no longer climbing the stairs on all fours), I have mud under my nails, and my competitor number remains – though fading – on my arm.

Don’t get me wrong, it’s called Tough Mudder, so of course you know there’s going to be some mud involved, but this was 500,000 litres of the stuff. Like a festival in monsoon conditions, there’s simply no escaping it. Not that you would want to, getting down and dirty is what it’s all about, and if you’re anything like us, the dirtier you find yourself, the bigger the smile. 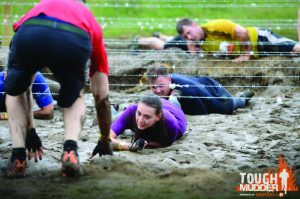 The BESTFIT team were submerged under water several times, once with ice cubes, and together we spent more time horizontal in the mud than vertical on dry ground.  And we loved it.

The thing about Tough Mudder is, we all know someone who’s done it. We’ve all heard about the obstacles, but until you try them for yourself, you cannot comprehend the mayhem. And even as you start, with a seemingly enjoyable canter through stunning grounds that offer no sign of the carnage to come, you literally have no idea what’s to come, or what will be involved in overcoming whatever they thrown in your direction.

All of this changes at Arctic Enema – The Rebirth. In many ways, this obstacle will change your life. Of the 24 obstacles on our 10-mile course, this is one of Tough Mudder’s flagships. If you’ve heard of it, the anticipation is far worse than the doing of it. You can see it coming, so you have time to prepare. As you get closer, a small queue develops, though there’s little time to debate whether or not you’re actually going to do it. One of Tough Mudder’s mantras is ‘no whining’, so those who procrastinate are given short thrift. You’re all in or you might as well go home. Do the thing, move on. ‘Only kids whine’, right?

At the top of the tubed slide you’re confronted with the task in hand; a skip filled with water and 40 tonnes of ice. Once submerged at the bottom, you have to go under again to pass a wall, then swim through the ice to find your way out. It’s cold. There are no words to describe just how punishing it feels on your extremities, or how shocked you’ll feel, but at the same time it’s also liberating, thrilling and awesome all in one. It’s all levels of insane. You’ll want to cry, laugh, scream and shout all at once. Many do. And that, right there, is why people sign up; it’s an injection of adrenaline few activities can match. 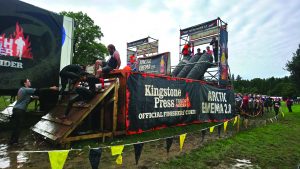 You Against The World

No sooner are you clear of the freezing water you’re off again, this time cold and weighed down by wet clothes, but there’s little time to think about it because a) you have another 20 challenges to smash and b) it’s too cold to not move.

Ultimately, it’s these obstacles that will live long in the memory, the ones you’ll discuss over your deserved post-event bottle of beer or cider and that you’ll tell your friends about afterwards.

Take Mud Mile 2.0, for example, a series of mounds and pits full of muddy water resembling a genetically modified BMX course. In short, there’s no way of coming out of it clean or dry, but that’s not the point. In fact, the muddier and wetter the better, people were literally going head first, and loving it. Any worries about getting cold or wet are long gone and by now you’re embracing the carnage, if not worried about how you’ll ever get your socks white again.

The Block Ness Monster involves 60ft of rotating barriers separated by neck-high water that involves wading, pulling, sliding and, ultimately, laughing at the ludicrousness of it all. Like some of the other obstacles, you’ll find it hard to finish on your own, so your team members, and fellow Mudders, will pull together to drag you and others over the rotating blocks. 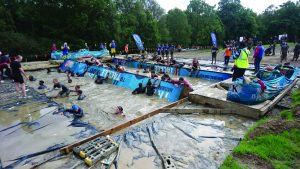 Augustus Gloop includes another dunk into neck-high water before climbing a tube which is pummelled with water, and there there’s Funky Monkey – The Revolution. Now, until this point, I had considered that most people could complete a Tough Mudder without any training. Those who do little in advance can run as slow as they like, and probably be helped over the obstacles, while those who put in the hard yards will conquer the obstacles with ease, or help more people through. However, this all goes out of the window on the monkey bars, when all you have to rely on are your biceps, triceps and your own levels of determination.

Put simply, Funky Monkey – The revolution requires you to negotiate inclining monkey bars before a series of revolving wheels and reaching the other side. This is tough at the best of times, but when the bars are wet it’s the equivalent of Bambi skating on ice for the first time. Those that make it successfully stay dry and earn the admiration of those in the queue behind them. Those who fail, which is almost everyone, are dropped into neck high water once more to curse their lack of upper body strength and/or training. Of all the obstacles, this is the most testing, and the one you’ll come away hoping to crack should you ever sign up for it again.

Thankfully there are some breaks from the onslaught. The Hero Carry and Hold Your Wood challenges are smaller in comparison and act as ‘breathers’ between the major tests of your physical and mental capabilities. It’s obstacles like these that also break up the 10-mile run so that it never feels like an actual 10-mile run. In fact, harder than running the distance itself is doing it through the mud. Sometimes it feels like you’ll lose your trainer, others like wading through treacle. Sometimes both.

And so to the end. By the time you reach the denouement you will have successfully negotiated high walls, Birth Canal and even pulled yourself up Everest, a ramp that requires upper body strength and a helping hand. And then you face the Pyramid Scheme, where your team will have to work together to negotiate a slippery incline. It will inevitably involve one or more of you lying on the surface and the others climbing up, along or beside each you before dragging you up to join them. Expect a rogue boot to the face or two, but a satisfying sense of achievement when you’ve finished. 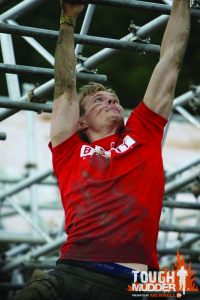 Shock To The System

Once negotiated, you begin to approach the end, which brings news good and bad. On the plus side, your closer to a bottle of cider. The down side, is that you have to negotiate Electroshock Therapy, a series of dangling wires providing 10,000 volts of mayhem. We were encouraged to tackle this as a team and in a line at all times. This becomes harder when you’re being zapped with what I can only imagine feels like it is to be shot by a taser. It’s horrendous, a little bit painful and unrelenting, but when you get through it you’ll be smiling, maybe even chuckling. If you don’t laugh, you’ll cry, and at least by completing it you’ll then be greeted by your commemorative headband, t-shirt and complimentary cider. Victory. 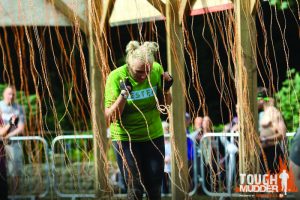 Tough Mudder is just one OCR in an ever-crowded genre, yet it continues to stand the test of time, and even set the bar. It’s expensive to enter, granted, but as you find when you congregate at the start, it’s organised with military precision. And as you walk in, you’ll be forgiven for thinking you’re entering a music festival, such is the sheer scale and noise.

Each event must take an age to plan and erect, and there is no stone left unturned when it comes to providing the ultimate test of mind and body.

The most abiding memory for me, though, was the culture. From the warm-up at the start, where you’re encouraged to workout with those around you and in a fun and enjoyable way, set a very high bar. No simple or static stretches, but dynamic movements to top tunes and a comedy PT. 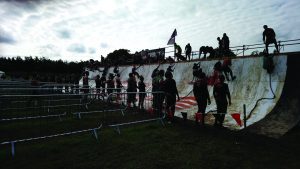 From there, you’re reminded – again – that it’s not about the time you set, but the help you give your team members, and others. This was evident throughout the event, but perhaps more so at one of the climbing walls, a genuinely challenging obstacle that required hauling your body over a wall using pegs in muddy holes and small slots for muddy trainers. Here, perhaps more than any other obstacle, you will need help, and there are plenty of people to offer it. People you’ve never met willing to put aside their own experience for a minute or two to help your overcome and win. In that solitary moment in time you’re united by your determination, effort and goodwill, traits very much welcome in today’s crazy world.

Tough Mudder’s raison d’etre is arguably it’s greatest asset, and the reason why so many ‘Legionnaires’ (repeat Mudders) keep going back for more.

Ultimately, it’s a lot of fun, an enjoyable test whatever your level of fitness, and a heart-warming experience in which the madness of it all needs to be embraced and celebrated. 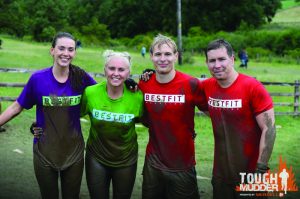 The Gator Tail is the new extra-long luxury deep tissue massage foam roller that has been created to give you the ultimate in pressure-point muscle relief when you’ve pushed yourself round a lot of challenging obstacles. At 45 cm (18inches) long, the Gator’s specially designed 360º tough ridges work deep into your tissue, enabling you to push yourself to work out harder, for longer. 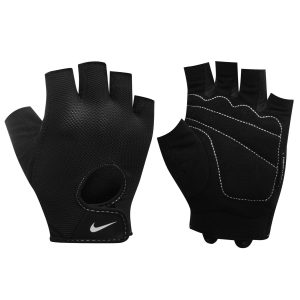 These Nike training gloves offer a great performance to aid you in your experience, particularly when it comes to monkey bars and wall climbing.  The training gloves feature a padded microfiber palm
and an adjustable wrist
strap for extra comfort. 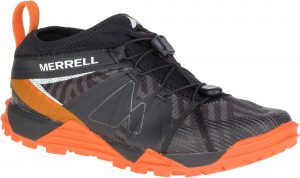 Merrell has teamed up with TM once again to create a shoe designed to tackle the demands of the obstacle race. We tried these in the recent event in London last month, and they kept us on our feet despite ludicrously muddy conditions under foot. They drain well thanks to mesh panels and keep any unwanted debris out. They offer great support for the off-road conditions, and include a thin cord-like lace on top and toggle drawcord, which allows you to tighten and undo quickly, which really came in handy from one obstacle to the next.

The Weekender Issue 22: New Ways to Test Yourself
bfadmin

The Weekender Issue 22: New Ways to Test Yourself