Is Scalp Micropigmentation an effective solution to hairloss?

Is Scalp Micropigmentation an effective solution to hairloss?

Hair loss might not have a direct impact on the way we stay in shape, but for many people it can have an effect their confidence and self-esteem. 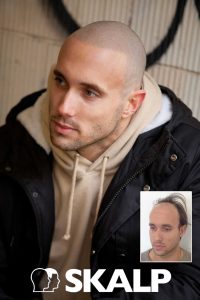 Hair loss affects millions of us, but the good news is that there are plenty of affordable treatments out there if you know where to look.

“I didn’t notice it at first, but it was pointed out to me that I had started receding at the age of 23 and it continued to thin,” explains Tony, who recently shared his hair-loss story with us on BESTFIT TV.

“As a result, I was always attempting to hide it by brushing my hair forward, and it has probably caused me more stress than it should have done. Getting ready to go to work or go out has taken too long, or I’ve had to use too many hair products to keep my hair in check, which isn’t healthy. At the gym, I wear a cap, which isn’t ideal. My confidence has taken a knock because as a result.”

Tony attempted to deal with his hair issues by visiting Skalp, who offer an affordable, non-surgical solution called Scalp Micropigmentation (medical hairline tattoo), which they describe as ‘the ultimate in non-surgical male and female scalp grooming; an incredible life-changing treatment where natural pigments are applied at the epidermal level of the scalp to replicate the natural appearance of real hair follicles or strands – depending on your hair loss extent, and desired look’.

Their method is regarded as the best treatment of its kind available in the world today and uses natural pigments and application methods applied by fully qualified practitioners. They use three to four shades of pigment to create the most realistic finish – giving a younger more confident hairline.

We followed Tony’s journey on BESTFIT TV. His treatment was relatively simple. After a free virtual mock up and consultation, his practitioner wanted to fill in his bald and thinning areas by replicating thousands of hair follicles to give the appearance of a full head of hair.

The first step to achieve this was to shave the hair and draw a hair line on Tony’s scalp, and then match the colour to the back of the head. The idea is that they identify the densest part of the head and replicate it to areas with less hair. They then use a microneedle to place pigments under the skin.

At first glance, the equipment used looks close to that used when getting a tattoo, though in this case the pigments are designed to not fade or smudge. And don’t worry; you won’t experience the pain of a tattoo! Tattoos involve a scraping of the skin, which scabs afterwards. In this case, the head may be red afterwards, but that’s the extent of the after effects.

Two hours after Tony’s treatment started, he was finished. Four weeks later, Tony was extremely happy with the result.

“It looks so real! I’ve forgotten what I used to look like beforehand and it’s now a lot less maintenance,” explained Tony. “I’ve even forgotten where my hair starts and ends. I can’t believe I didn’t do it sooner, my life is stress-free. Best thing I ever did!”

Visit skalp.com and see how scalp micropigmentation can help solve your own hair loss.

Train with Our Home Workouts
BESTFIT

Home Workouts Every Day on Your TV Screens
BESTFIT

Couple Transformation: Before and After
BESTFIT

Train with Our Home Workouts

Home Workouts Every Day on Your TV Screens

Couple Transformation: Before and After