Dr. Emma: The Power Of Three

Dr. Emma: The Power Of Three

As the seasons change so do our moods and choices of food, even our enthusiasm for exercise may wain. Even the healthiest eater would feel less tempted by a salad as autumn begins to draw in. The nights turn dark earlier and those comforting foods become more and more enticing. However, just because you crave something other than a salad does not mean your choices have to be less healthy.

To be honest, most of the traditional harvests at this time can be health boosting. There is anecdotal evidence that mushrooms could ease or prevent colds and flu, which might be useful as the weather changes. 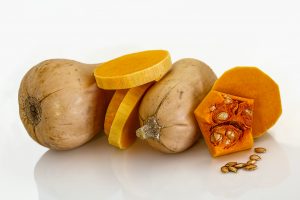 How many of you actually eat pumpkin? I bet the closest you ever get is carving a face in one for Halloween. The pumpkin and squash family are becoming more popular and they are starting to make their way to our plates and supermarket shelves.

With a wide variety of nutrients ranging from magnesium and manganese to copper, protein and zinc, pumpkin seeds are nutritional powerhouses wrapped up in a very small package. They also contain plant compounds known as phytosterols and free-radicals, which are scavenging antioxidants that may give your health an added boost. Recent research conducted by Middlesex University found that certain compounds in pumpkin seeds were deactivating the enzymes that can cause prostate enlargement , so may be helpful in the prevention of prostate cancer. 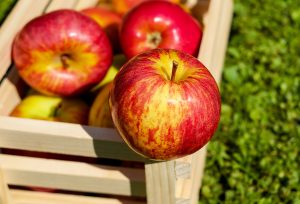 An apple a day keeps the doctor away, right? Well, maybe there is actually something in that old phrase. Be mindful of which brands you choose to include in your meal plan, though, as some are a lot higher in sugar than others. Try to go for the tart green ones and not the sugary sweet ones like Jazz, Fuji and Pink Lady.

Apparently Irish, Italian and French researchers have found the same conclusion that eating apples can help to lower cholesterol levels, which in turn could help to prevent the possibility of suffering from heart disease or a stroke. It is thought that the key ingredient is the soluble fibre called pectin. However, it is not a lone hero, it appears it has to work in conjunction with the vitamin C that apples also contain, in combination they may help to remove cholesterol from the blood.

If you suffer with diabetes, pre-diabetic symptoms or fluctuations in blood sugars, the sugar that is contained in apples has a low GI rating, which means it is released slowly and steadily into the bloodstream. Foods that help to keep your blood sugar stable can also help you to feel fuller longer as there are fewer peaks and dips causing cravings. One of my favourite snacks is sliced apple, spread with almond nut butter.

It may be a complete coincidence, but researchers found a correlation between a higher consumption of apples and the reduced numbner of colds, flu and upper respiratory problems. Maybe just as they are ready to harvest, they also deliver one of nature’s own helping hands to maintain your wellbeing. Perhaps it is also the fact that the average apple contains 25% of your RDA of vitamin C.

There is possibly a down side to eating a very large number of apples, as more recently they have been linked with tooth decay. Again, the sweeter the apple the more this could be likely. If this doesn’t put you off remember to drink plenty of water after eating fruit and wait at least 45 minutes before you clean your teeth so that the enamel is not damaged. 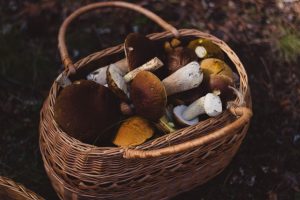 Mushrooms have long been used in Eastern medicine for their health-giving properties. In fact, they are so interested in their potential benefits they have funded an entire Mushroom Research Institute in Japan. The autumn is a peak time to harvest mushrooms. Have you ever been mushroom picking yourself?

Scientists have yet to prove any health benefits of the regular button mushroom, but the oriental mushrooms may be able to stimulate the immune system and they may have an effect on cell growth rate.

Of all the oriental mushrooms, you are most likely to have heard of the Shiitake. It is also the most comprehensively studied and it has been found to contain a strong anti-viral substance called lentinan that stimulates the immune system to such an extent that in tests it appeared to prove more effective against the flu virus than a powerful antiviral drug. It is thought that it works by stimulating the immune system to produce more interferon which is the compound that can fight viruses in your body.

The oriental mushrooms may also have a positive effect on the reduction of cholesterol and help in reducing the harmful effects of saturated fat.

I don’t think you can deny that these are some excellent reasons to include the seasonal produce in your meal plans, so here are some ideas of how you could do that.

A hearty seasonal soup that has a nutty and creamy mix. It yields a thick & filling dish. 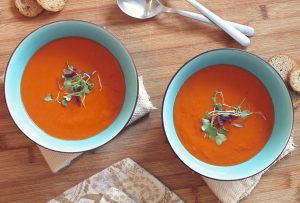 1 Preheat your slow cooker on low and your oven at 400 degrees C. Combine the pumpkin, oil, 1/4 teaspoon salt, and 1/4 teaspoon pepper on a baking sheet coated with cooking spray. Bake at 400° for 45 minutes or until tender.

or until thoroughly heated (do not bring to a boil). Stir in the remaining 1/4 teaspoon pepper, turmeric and All spice before leaving it to simmer steadily.

4 Place half of the pumpkin, half of milk, and half of the water in a blender; process until smooth. Pour pureed mixture back into the slow cooker. Repeat procedure with remaining pumpkin, milk, and water until you achieve the consistency you desire.

5 Add 3/4 of the walnuts roughly chopped. You can keep the soup simmering on low or portion it up and freeze to re-heat at a later date.

6 Ladle 1 cup soup into a bowl and add a little pouring coconut cream.

7 Decorate with the remaining walnuts.

Macros (values are in grams) Per 1/6th portion

This is a fantastically simple dessert that leaves a beautiful festive aroma floating around your house. Yet another recipe utilising my slow cooker, this pudding has a delicate flavour which is easily created. 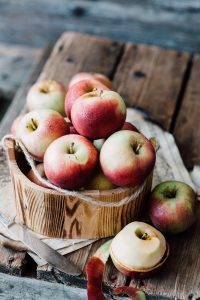 4 organic apples (or 1 per person)

1 Peel your apples and place in the slow cooker.

3 Slice the orange and add it to the juice.

4 Pop in 3 mulled spice teabags for ease as they will give a festive spiced flavour.

Macros (values are in grams)

Per serving (1 apple & some spice juice)