Women’s football continues to thrive thanks largely to England’s lionesses. Demi Stokes reveals how fitness took Mark Sampson’s side to another level at the recent Euros

Beating France for the first time in 43 years was a watershed moment for England’s women, what was the feeling in the camp after the quarter finals?

We were very excited, there was such a massive buzz in the group. We had waited for so long to beat them, and to beat a big team like that in a major competition. Yet we were also mindful that we’d achieved nothing at that point, so we were straight on to the next game.

What was it like playing a host nation in a big tournament? That’s a pressure that you wouldn’t have been used to before…

It was a big challenge, but one we were ready to take on. Ultimately, we wanted to get to the final and so we knew at some point we would have to face challenges like that, so playing strong teams or against the hosts. We thrive under that kind of pressure. Every game has seen us breaking through barriers.

The mindset in the camp was different. It used to be about doing as well as possible, whereas this year the talk was of trying to win and to find a way to ensure you win every game.

The Euros was always about us trying to push to the next level. In previous competitions, we were simply trying to compete, to see what happened. This time we felt we were in a position to beat every team put in front of us and we felt there was nothing to fear. We felt confident going into every match and if you looked at who was left at the semi-final stage, we had beaten all of those teams in their own countries. So we had every right to want to win every game. Essentially, we went to Holland to win the tournament. 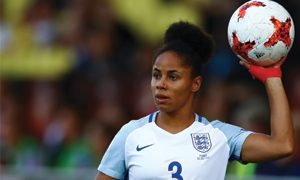 The coach Mark Sampson said you went into the tournament as the fittest squad. What changed, and how did you go about making that happen?

It’s down to a couple of things really. Firstly, the players are all playing every week at club level now and as our league gets more competitive, we’re all becoming fitter and stronger. And you can see that in our matches. We were very sharp, and pressing teams on the front foot.

We knew we had to be fitter. The big teams who had beaten us before had always been fitter. You can’t control what your opponents are doing and to some extent you can’t control how a match might go, but you can control how fit you are, so we were very keen to at least take control of that.

With England, our coach Ben Young has been pushing us to the next level for about two years. We’ve been doing more weights and following programmes that ensure we’re as fit, or fitter than those at the very top levels of sport. We saw our weakness and we did something about it.

What was the worst thing you had to do?

We did something called ‘the 300s’, which was maximum effort sprinting over 300m at the end of our training sessions. Normally, when you run those distances, you’re fresh at the start of your session, so it’s brutal to that at the end! And because we’re racing each other there is no hiding place. It’s horrendous, but it has made a huge difference. It has been all about getting our bodies to be consistent in every minute of every game.

How did you recover after games?

We combined yoga with ice baths and use of the cryotherapy pools. We’re very lucky in that we had an excellent team around us.

We’ve seen that the men’s team has found it hard to fill time between games. Did you find that a problem, and how did you relax?

We recognised the importance of getting balance at an individual level. We’re all different, and so what works for one player might not work for another. Some players like to have a coffee or go for a bike ride, whereas I like to sleep and watch movies.

More than 3 million people watched the quarter final win on Channel 4. Were you aware of the interest building back home?

You tend to live in a bubble when you’re at a tournament and so it can be hard to recognise that stuff and reflect on it. However, we have had friends and family out here with us and we hear from others back home, and that’s great. To have 3 million viewers at home and loads of fans here with us in the stands was brilliant.

What does it mean to have reached the semi-finals?

We were very open about the fact that we wanted to go all the way. Unfortunately it didn’t work out that way, but if one girl is inspired to get involved in playing football, then anything we have achieved will be worth it. 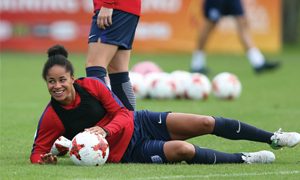 So near, yet so far