The TV and radio favourite is in the shape of her life, and it’s not down to Strictly…

You’ve always been into your fitness, but after doing a transformation last year you seem to be into it more than ever. That must have made doing Strictly a bit easier?

To be honest, I found the Strictly tour easier than I found the shows, but I think that’s because I was able to look after what I ate, because I had the time to do so. I could plan what I was eating whereas during the shows I think I was the only contestant to put on weight! Although I was dancing all day every day, it just wasn’t to the same intensity that I’d been training. I was dancing for hours, but if it was ballroom dancing, for example, it didn’t break me into a sweat. I wasn’t watching what I was eating either, mainly because I’d leave home at 5.30am and I wouldn’t be back until 7.30pm. In a way it was nice, not to let myself go, but to stress less about what I was eating. However, it did prove to me how quickly your body can change if you stop eating well. 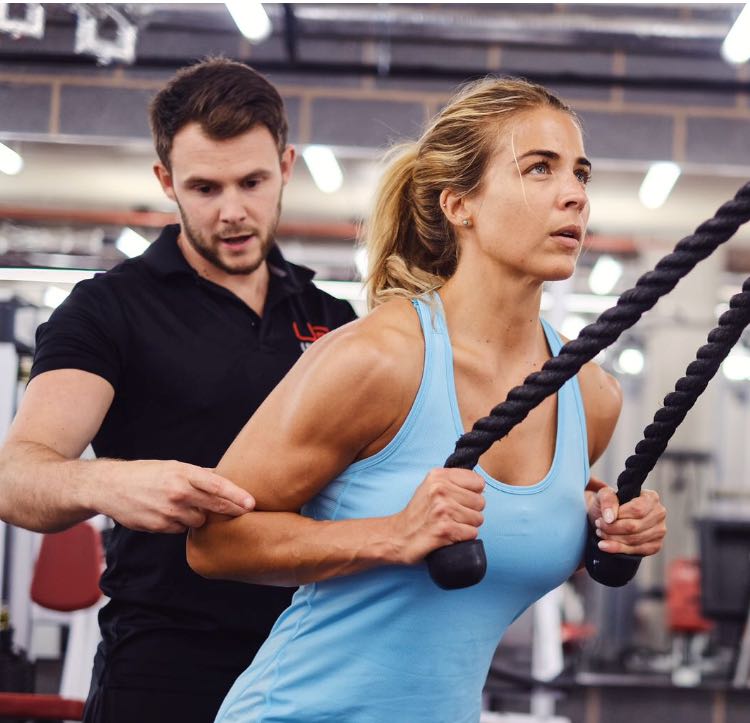 Your training has changed since you took on a 12-week transformation, and it seems the biggest benefit of the experience was a mental one?

I’ve always stayed in shape and I always felt pretty comfortable with myself and how I looked, but after the transformation I would wake up in the morning without an alarm, I’d feel happier walking down the street and I was in a better mood. I was sleeping better too, and my skin looked healthier. And it was all because
I was fuelling my body and training properly. You really do release happy hormones by training, and I reckon anyone would notice a difference after just two weeks.

You trained a lot before the transformation, so how did you feel about doing it before you started?

I wasn’t stuck in a rut or anything, but I wanted a new challenge. My routine was boring and I wasn’t enjoying what I was doing so much, and the transformation challenged me and pushed me out of my comfort zone. I always thought it would benefit my life, so I had nothing to lose by doing it. I’ve just started doing another one now, and I’m really enjoying it.

How did it change the way you train?

It made me realise that I don’t need to put myself through as much training. For example, I have friends who go to the gym for two hours, and now I don’t do more than 45 minutes at a time. The most challenging part, for me, was the nutrition, because I’ve always loved my food. Yet as soon as that becomes a part of your lifestyle, and you realise you don’t need to diet, it’s a great thing. I eat just as much, I just have more of the good stuff.

Did it change your attitude to doing weights v cardio?

I’ve always done weight training and I know a lot of women fear becoming too muscular by doing weights, but they’re just so good for getting lean, improving your posture and losing body fat. I’ve definitely been leaner since that transformation, and that’s only by doing one weights session a week alongside three cardio sessions.

Working on a morning radio show, how do you get enough sleep?

I need six hours. Six to eight is great, but anything less and that’s the biggest mood killer. I try and be in bed for 9pm, and wind down until about 10.30pm. I like to read or watch tele, not have my phone, and be in bed for a bit before I go to sleep. I like a bit of me time, and I’m more of a morning person now.

So, the Strictly Tour came to an end in February. What’s next for you?

I’m going to start my own fitness brand and hopefully bring out a book. At the moment, it’s all about the fitness. I’ve had so many women contact me through my social media accounts about how I’ve inspired them to train, so I just want to focus on that really.

The Strictly Tour took you all over the country, there must have been plenty of nights out involved with that as well. Did you go ‘out-out’ much?

Not really, though I probably went out more on the Strictly tour than the rest of last year put together! I like a gin and slimline tonic, always have done. Or a Corona. I’ll go out now and again, but not much; I probably went out six times last year? I’ve never been a massive drinker. It takes me three days to get over a hangover!

You’re quite active on social media, particularly Instagram, how do you deal with being in the spotlight?
Do you get many negative comments?

I try and keep my messaging as real as possible, so I like to post pictures of me without makeup on and doing the dog walk, etc. People tend to only post the good stuff and not document the bad stuff. It’s just not real. My niece is coming up to 14 and I’m constantly telling her that people don’t always look like they do on social media, and that she doesn’t have to look like that. I like getting lovely messages from people who say they’ve been encouraged to do any kind of fitness. As for the negative ones, I kind of feel sorry for them for taking the time to
log in, write some hate, and log off. What’s the point?

You’ve been in the public eye since Hollyoaks. Has that been difficult?

Without sounding too harsh, as I’ve got older I care less about what people – particularly strangers – think of me. When I was younger I always tried to please everybody, and my mum would always say that if you were trying to please everyone you were doing something wrong. She was right! Life is too short.

Images thanks to UP Fitness

GEMMAS TOP 10 TRACKS TO WORKOUT TO

Anything from the • Rocky  Soundtrack!

Starley• Call on Me

Tags:
Previous Article
The definitive guide to getting a six-pack
Next Article
Hangover Help