Introducing the new Tennis Technology tipped to be a game-changer….

On the back of Wimbledon, more and more people are loving tennis this year and an innovative new system, PlaySight SmartCourt, currently installed initially across 12 David Lloyd Clubs, is paving the way forwards as a new way to fine-tune Tennis skills – whatever your level!

With five cameras filming one court at any one time, these can be set to record every move made as well as offer on-the-spot live coaching, plus a full de-brief and analytical report afterwards.

Melanie Kristall, Racquets Manager at David Lloyd Leeds says: “From a coaching perspective, the visual aspect allows the player to improve at a quicker pace. The player can see exactly what they are doing wrong and not just rely on the coach telling them. From a fun aspect, PlaySight calls “good shot” when a target is hit within the drills section to the speed of your serve. It’s revolutionary to the sport of tennis and I look forward using it with the racquets members.” 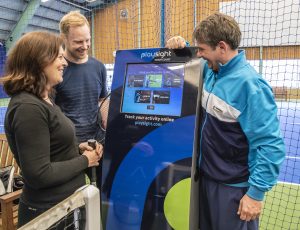 The thought process behind the technology is that people respond more to visual than thought training. So for example, cameras focus on capturing, then analysing all your work. This is also extensive in its offering and ultra-personalised. It analyses each person as an individual and uses personal data such as weight and height as part of its criteria. It then works out everything from how many calories are burned in one game, to how your sense of serve is, right through to dissecting your stance whilst serving.

Even the seconds of your longest rally and sense of speed is worked out and broken down to incentivise you. And with match stats and instant video replay, it even records the speed of serve, calling the line and tracks technique which can be later analysed.

The player simply logs-in pre-match, before choosing to opt-in. There’s also an optional setting, which allows the system to correct you during a game.

As players step off-court, the SmartCourt session is automatically uploaded to the PlaySight network, for the player to review on a computer or phone anywhere, at any time; to playback those epic rallies, cross-court winners and comical moments; reliving the action alone or sharing with friends.

It can be used with expert tuition from one of David Lloyd’s tennis coaches to really accelerate your game and help improve performance.

Melanie adds: “You can set it to whichever level you like. It can interact with you during a game or you can choose to opt out. There is also a Playsight App and website which allows players to use it on-the-go. This is inclusive within membership at David Lloyd.”

Many sports professionals believe this will revolutionise the future for Tennis players. Patrick Mouratoglou, who coached Serena Williams says: “It’s an unbelievable tool that can be used to understand what is happening during matches. And it’s a fun way to do it. Far above what already exists in terms of technology for tennis.”

Previous Article
News: Walk Like a Woman!
Next Article
Does Mealtime Matter?