Joel Matip costs Liverpool £0 in transfer fees, but is turning into the signing of 2016. Here, we track how he’s adapted to life in England.

When Joel Matip arrived at Liverpool last summer, it’s fair to say he did so without fanfare. Other signings were stealing more of the headlines. In Manchester, for example, Zlatan Ibrahimovic and Paul Pogba joined United, while at the likes of Ilker Gundogan moved to City. Big fees. Big stories. Matip, in contrast, went under the radar.

A free transfer from a club who finished fifth in the German Budesliga last season, Matip was described as a player with the potential to thrive under Jurgen Klopp, but who himself admitted he needed to hit the gym if he was going to succeed in England. His coach, Jurgen Klopp, agreed.

“I am ready for it but I also have work to do on my body,” Matip told the Reds’ official website last summer. “I have to work on my body to be physically strong [enough] for the Premier League.

“I decided to do it myself, but I think the coaching staff and manager will help me reach this level and to be fit for the season.”

“Tall players like him need physical fitness,” said Klopp soon after the Cameroon international’s arrival. “He needed to create some physical strength, but there was never a doubt about his quality.”
Fast-forward six months, and with Liverpool chasing a first league title in xx years, Matip has proved arguably the best English signing of 2016.

A central defender with the ability to play in midfield, Matip has formed a formidable partnership with Dejan Lovren – the duo communicate speaking German – at the heart of Liverpool’s defence. In Matip’s first 11 games, Liverpool conceded just eight goals and kept three clean sheets and the side were drawing and winning games they would have otherwise lost or drawn in previous seasons.

Calm on the ball and strong in the air, Matip has proved a master of being in the right place at the right time, so much so that, for a defender, he actually makes few tackles. Astute when it comes to making interceptions, he’s calm on the ball, a vital link between defence and attack. He’s even shown himself strong enough to contend with the strongest strikers in the top flight; a rare loser in aerial challenges and surprisingly adept when forced to use his body.

No doubt Matic’s strength and physical prowess are in part to Liverpool’s fitness coach Andreas Kornmayer, a popular figure at previous club Bayern Munich, and who has introduced triple training sessions in an effort to help implement Klopp’s gagenpressing tactics. However, much of it is also down to Matip himself, who has quietly been going about his business while settling at his new club.

“I’m in the team and I’m playing, and I don’t think too many people can complain about our record so far this season,”

He tells BESTFIT. “So there are no worries in a football sense.

“Away from that, it’s obviously a new country and a new town for me. Everything is new and it’s my first time living away from where I grew up. I’m a long way from Germany, but this – the chance to play for Liverpool – is what I wanted. That’s why I’m here and I’m settling in well. It’s all good. “English football is more physical. Many people told me about it before I arrived and I can say it’s true now. I’m learning about it and still trying to improve that side of my game.”

Matip is modest. His coach, team-mates and supporters are raving about him. Described as a ‘big success story’ by Liverpool legend Ronnie Whelan, Matip has been praised by his teammates.
Matip himself believes his success owes much to the players he used to train against at his previous club, which include world-renowned strikers Raul and Samuel Eto’o.

“As a defender I obviously played against them in training. Great players. One minute you are beside them and think you have them covered and the situation is under control. But they have different moves, special moves that mean they already know exactly what they are going to do are one step ahead of you. That’s how you learn, by playing against great guys like that and seeing up close what they do.” As well as learning what it was like to face such players, Matip also admits their work ethic was admirable.

“They always wanted to work hard every day,” he says. “Raul was 33 and had won so many league titles and European Cups with Real Madrid when he came to Schalke. Despite that he still wanted to win more. He still had a real hunger to train well and push himself to score even more goals. Eto’o was the same. That was great for me to see.” Matip’s rise at Schalke could also explain his success so far at Liverpool. Intrioduced to the first team at 18, he was forced to compete with German’s best players from a young age.

“Normally I would have had to play with the Under-19s at that stage of my career. But the year before I think I did my job well or okay. So they took me up to the senior team. Then I think somebody got injured and I did well in the training session. The coach gave me a chance and I did well. Then I got another chance. I played some games and kept going from there.”

Matip has won silverware already but joins Liverpool keen to add to his trophy cabinet. So, does he feel he and his side are good enough to maintain their assault for silverware?

“I haven’t won enough yet in my career. At Schalke we won the German Cup in 2011 and that’s my only title. I want to change that and it’s why I came here. But it’s about staying clear in the head: there is no point in thinking too much about anything right now because it’s a long season. We want to win the next game and then we’ll look to the one after that.”

Matip encapsulates Klopp’s high-energy approach. Use these drills to power up your engine for 90 minutes of relentless running, writes Ben Welch

To run down the opposition you need to be super fit and agile – capable of changing direction in a flash as you hunt the player in possession. The chaos mirror drill is the perfect exercise for this. Working with a teammate, mark out a gate using two cones, 5-10 metres apart. One player is the leader, the other the follower. The two players face up to one another between the two cones, with the leader changing direction as many times as possible. The follower has to try to react to the leader’s movements and mirror what they do. “This is high intensity reactive drill, that challengers the players to be explosive and powerful,” says Dr Duncan French, University of Notre Dame’s director of Performance Sciences, who worked with Newcastle United between 2009-2012.

To execute the pressing game you need to be perform repeated sprints for 90 minutes. You don’t need any fancy equipment or special training facility, you can do this on the road or at your local pitch, says high performance consultant Karl Halabi, who has worked with Chelsea, Watford, Derby County and Reading. “If you’re out on the road running, sprint between two lamp posts and jog between the next two,” he explains. “If you’re working on pitch sprint from box-to-box, then jog box-to-box and repeat this sequence as many times as you can in three minutes. Do this and you’ll notice the difference on the pitch.”

3 HIIT TRAINING WITH A BALL

Pressing doesn’t all have to be about running. If you can round up a few friends to play with you can simulate a game situation.
Darren Burgess, high performance manager at Port Adelaide, who used to work at Liverpool, has just the drill. “ Stand on the 18-yard line with a team-mate, and face your other team-mate, who’s standing on the halfway line,” he says. “Play a long pass to your team-mate on the halfway line. Run towards him, and once you’re 5-10 yards away he should play a pass which you return first time. He then sets off on his pass and run. Everyone completes three runs per drill.”

There’s no danger of Matip getting pushed off the ball too easily. Use these three exercises from Chris Neville, head of athletic performance at Blackburn Rovers to pack on the muscle

“This exercise is designed to work each arm individually. This movement replicates holding off an opponent when you’re challenging for the ball for fighting for space at a set-piece. To perform this exercise, grab two dumbbells, one in either hand. Pick a weight that is comfortable, but challenging. Lay flat on your back on a bench with your arms straight and the weights directly above you. Bend your left arm to lower the dumbbell, bringing it to the side of your body so it’s just above your chest. Pause and then return the weight to the start position, before repeating on your right arm. Aim for 2-3 sets of 8-10 reps.”

“This is a leg strengthening exercise that’s really important for footballers. Technique is crucial so you should master before you start add lots of weight. Progression should be gradual. Place the barbell on the back of your shoulders. Stand with your feet shoulder-width apart. Keep your back straight and look forward. Brace your core, drop your hips back, keep your chest up and sink down until your thighs are parallel with the floor. Push up through your heels until you’re back in the starting position.

This exercise will work the quadriceps, glutes and hamstrings. Aim to complete 2-3 sets of 10 reps.”

“The pull-up is a traditional exercise, but an effective one. This exercise replicates pulling movements, like jostling with an opponent. It improves back strength, which is important to the game of game. To get the most out of this exercise you need to get the technique right. Grip the handles on the pull-up bar with your arms fully extended. As you pull yourself up, bend at the elbows and bring your chin in line with your hands. Lower yourself back down and repeat the movement. Aim for 2 sets of 4-5 reps.” 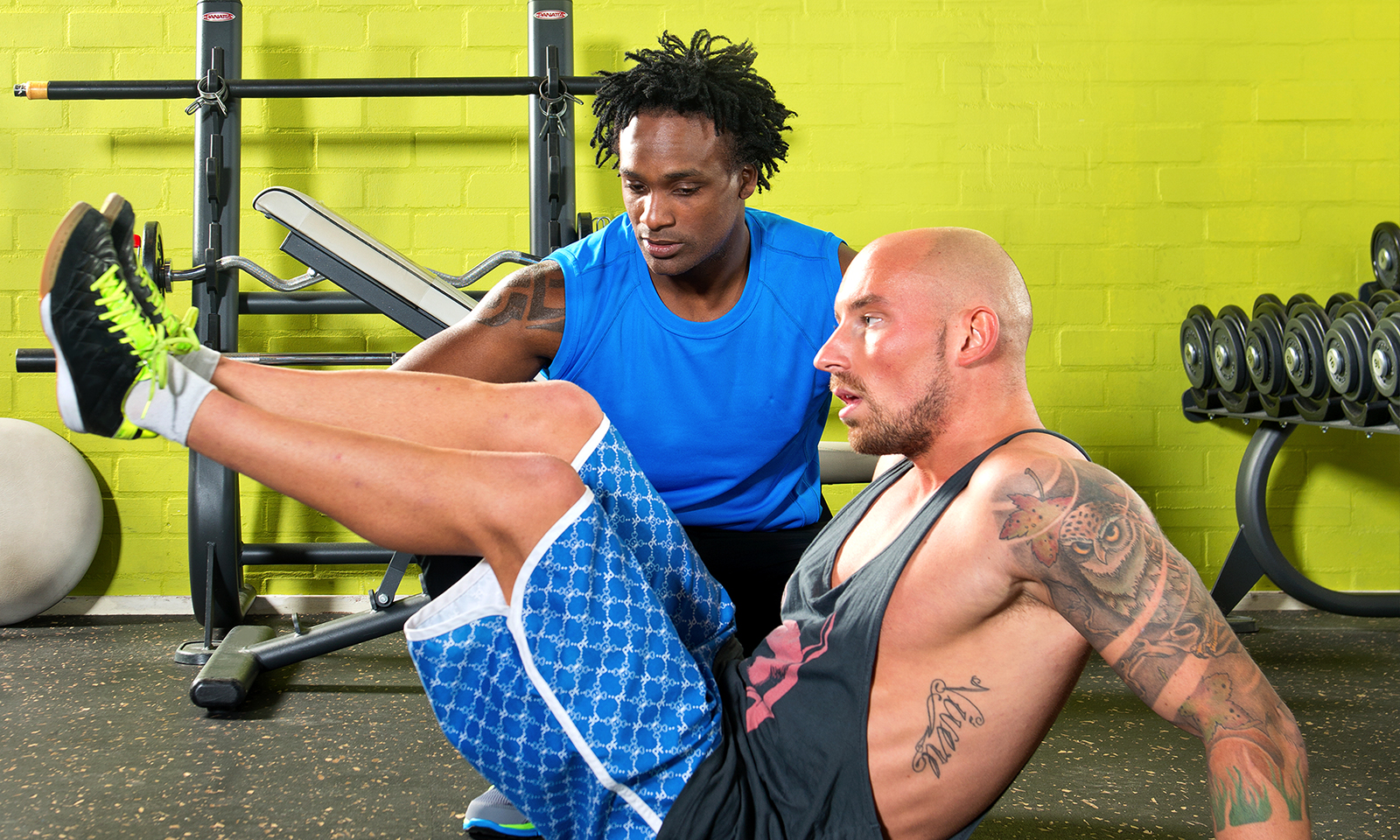