Seven exercises, one circuit… there can only be one winner!

Leeds Rhinos forward Anthony Mullally was one of seven celebrities to tackle the BESTFIT TV Celebrity Challenge. the Question is, how did he get on? 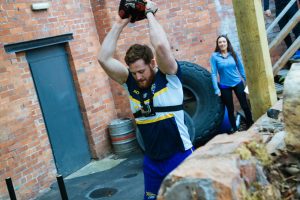 Rugby League forward Anthony Mullally is a professional athlete, he’s at the peak of his powers. The 26 year old combines upper body strength with ludicrous cardiovascular fitness on a daily basis, and again in front of thousands each weekend. So, when we invited him to the BESTFIT Celebrity Challenge, we thought he’d be well equipped. Mullally is one of seven celebrities to take on our challenge on BESTFIT TV, alongside such stars as Laura Carter, Jess Cunningham and Kissy Sell Out.

The premise is simple: starting with 500m on the spin bike, our celebrities are required to do four tyre flips, 10 box jumps, 20 battle ropes, 10 bag slams, a 25kg sled push and a bear crawl to finish. The task? To complete our circuit as quickly as possible in an effort to top the BESTFIT leaderboard at the end of series one.

As a rugby forward used to such herculean efforts, Mullally is made for both the tyre flip and sled push, but how would he fare with the rest? You won’t be surprised to hear that he did okay. But in his own words, he didn’t find it as easy as first expected…

“I was actually a bit nervous, as I’d trained with Leeds that morning,” he laughs. “I thought I might be a bit stiff. The hardest bit was going from the tyre flip to the box jumps, which was pretty hard. However, once I’d nailed the box jumps I felt home and dry.”

Mullally weighs 155kg and is used to pushing apparatus on the rugby pitch, not to mention getting to grips with blokes the same size, or bigger, on the pitch.

“I got into my rhythm after the box jumps, so I felt pretty good about it. I’ve no idea whether my time was the quickest, but I know from the faces of those doing the timing that it wasn’t bad, so we’ll have to wait and see!”

To find out what time Anthony achieved, and to see how he fared on the leaderboard, you’ll have to wait until series 1, episode 5 of BESTFIT TV. First up in episode 1 are the West Twins (eagle-eyed readers will recognize them from a previous workout). The twins set a decent standard, before Laura Carter and Jess Cunningham took on the challenge in episodes 2 and 3.

Be sure not to miss our Celebrity Challenge by watching BESTFIT TV. Reckon you could beat the times posted? Let us know, and we might even get you involved next time around…