Grime artist Stormzy’s appeal is spread wide – a musician, a fashion icon, a fulcrum for equality in what is a complicated social landscape, and the  best evidence that fitness can be the ultimate  platform for success in life.

Ever since a tabloid newspaper broke the story of rapper and grime icon Stormzy taking Prince William through his paces at the £3,000/year Chelsea Harbour Club, the subject of the musician’s fitness has been high on the agenda.

“To be frank, it’s important for me in terms of keeping straight,” he says. “I’ve had dark times in my life that I’ve needed to find a route away from, and nothing has come close to solving those issues in my mind than health and fitness – nothing at all.”

Referencing a well-publicised battle back from depression whilst noting his own vulnerability at potentially falling back into “the darkness”, the 24-year-old’s pursuit of high-octane workouts is doubtless the fullest release from a career that, along with all the trappings of money and fame, also offers anxiety and pressure in abundance.

From squats, crunches to free weights and track work, Stormzy’s passion for fitness isn’t pigeon-holed like a number of other celebrity names. “I need to have variety otherwise I can lose focus,” he says. “For me, mixing it up is not only good for the mind, but it means my whole body is responding to different challenges, and that’s what I need.

“That said, I never want to dress it up to be something it’s not. I’m not posing – staying fit is just a process.” 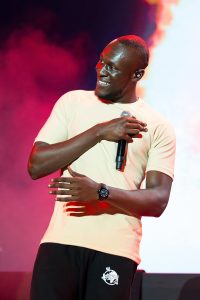 Stormzy’s girlfriend, Maya Jama, is another passionate advocate of an all-fit lifestyle, and the rapper admits he sometimes struggles to keep pace. “We’re not in competition but it’s good to have someone pushing you along – everyone needs that, in any walk of life.”

Perhaps the one issue with 6ft 5in Stormzy is his inability to accept anything less than perfection, fitness included. “I find it strange and uncomfortable to aim for anything less than the greatest,” he offers, with typical bravado. “That doesn’t even make sense for me, that.

Does that include being the fittest in the gym? We’re unsure. Yet by virtue of the 24-year-old’s physique, he can’t be far away.

Stormzy continues to move his booming fusion of urban sound forward in 2018. He’s headlining the Wireless Festival in July and has other major outdoor appearances booked across Scandinavia and mainland Europe. While still mainly showcasing established tracks from last year’s platinum-selling debut album Gang Signs & Prayers, it’s rumoured that a slew of new
material is close to completion, although in the modern version of the music business their release will be kept tight-lipped until the last possible moment.

Outside of home comforts, the rapper’s pursuit of the US market continues, but it’s a tough nut to crack, as numerous British rap and grime artists have discovered – Dizzee Rascal and Skepta to name but two. 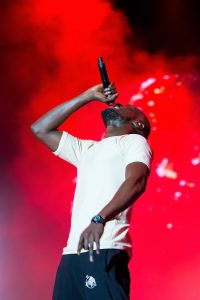 Stormzy’s 5 Tracks To Work Out To

WOT DO U CALL IT?

Tags:
Previous Article
10 Ways To Boost Your Metabolism
Next Article
Lean Machines: What It Means To Be Healthy