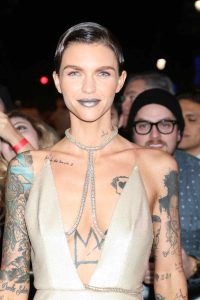 Female action heroes may sadly be few and far between, but every now and then a new face enters the frame. Enter former model Ruby Rose, who in the past two years has transitioned from MTV presenter to Hollywood’s go-to female action star.

“It’s my everyday routine, especially cardio and weights – it’s just like brushing my teeth,” she says of her morning workout. “And you can’t beat that feeling after hitting the gym!”

The slender ex-catwalk model is almost as effusive about food as she is the after-gym glow. An herbivore in the main – “I’ll eat fish sometimes if I need to get my protein up or there isn’t a vegetarian option” – Rose is committed to steering clear of any kind of strict diet or food fad. After all, if she eats too much one day, she’ll just “work out even harder the next.”

One thing Rose is partial to, however, is supplements – boasting a vitamin collection that reaches into the fifties. Her daily dosage includes zinc, magnesium and vitamin C – and the occasional Echinacea if she’s feeling under the weather.

Fortunately for Rose, when it comes to staying fighting-fit her latest projects have seen her working with some of the great and the good of the biggest action franchises, including Keanu Reeves –

“hell yes!” – as well as “queen of action” Milla Jovovich and, of course, Vin Diesel himself.

Rose and Diesel aren’t just best mates – she also credits her muscle-bound male co-star with providing the perfect inspiration in the gym. After all, as Melbourne-born Rose explains, it’s much easier to get “so ripped” quicker when you’re actively competing with Xander Cage himself.

“That was such a weird territory for me to be tackling because I am completely gun-shy,” Rose reveals. “I only touched a gun for the first time when I started doing films and then all of a sudden, I’m doing six weeks of sniper training and hauling around these huge insane weapons! But it’s such a powerful tool to pull you into character and I almost had to have that because these are people who couldn’t be further from me.”

Playing to her strengths, Rose’s background in boxing, martial arts and kickboxing comes to the fore. Having won in a charity bout against lightweight Yi Sia after just three months of training in 2012, the actress had an ace up her sleeve in the form of Patrick Murphy, the LA-based trainer to the stars.

In order to build core and leg muscle endurance, as well as Rose’s cardio strength, Murphy put her on a routine of triple-threat moves that comprised mountain climbers, scissors and frog jumps to maximise the effect on her entire body.

But despite her newest project being a horror-thriller named Meg alongside Jason Statham and a 70-foot prehistoric shark, Rose is tentative about taking on the mantle of the silver screen’s newest action queen in the mould of Jovovich or Kate Beckinsale.

“If people are calling me that, I am beyond humbled and also at pains to convey I should be so lucky,” she says. “You know, I idolised Vin, wanted to do what he got to do with these set pieces and action sequences, and now I’m getting to do all that, or at least get a taste of what that’s like. It’s been my dream and I’m going to take these opportunities with both hands.”

“But I am also conscious of the fact that I don’t want to be pigeonholed, especially this early on because I’m only a newbie really and that wouldn’t make sense. After doing Orange, I want to do more drama but then I also want to do a comedy. I want to experience as many genres as I can, because I want to show that there’s more to me than guns and tattoos and stunts.”

Tags:
Previous Article
Tough Mudder returns, see how you can get involved this year
Next Article
Here’s our Pancake Day Protein Pancake Recipe

Denise Richards explains how she maintains that incredible body
bfadmin