GOT star gets ripped for Hollywood

GOT star gets ripped for Hollywood

Nikolaj Coster-Waldau, Jaime Lannister to you and me, has bulked up for his role in new film, Shot Caller. Here, he explains the hardest exercise he’s ever done, and why he’ll always be thankful to GAME OF THRONES as he prepares to swap TV for Hollywood

Jaime Lannister is one tough dude but even Nikolaj Coster-Waldau has to admit that the character he plays in his new film, Shot Caller, is a major league badass. Playing the part of a California stock broker sent to prison for ten years following a drunk-driving accident in which his best friend died, Coster-Waldau finds himself transformed into a hardcore convict. In order to survive inside a maximum-security prison, mild-mannered family man Jacob Harlon joins a white supremacist gang.

“The choice my character faces is to either join the gang and become part of that violent culture or become a victim,” Coster-Waldau says. “He’s not a bad guy, but he’s been put into a prison with violent offenders and he decides that he would rather not be a victim. So that means shaking hands with the devil and becoming a violent criminal himself while he’s incarcerated. You ask yourself what would you do in that situation and I can tell you that I’m not completely sure that I wouldn’t follow the same path he took.”

Directed by Ric Roman Waugh (Snitch), Shot Caller opens with Jacob being released from a federal penitentiary after serving ten years under the most terrifying conditions imaginable. The story then explores via multiple flashbacks and flashforwards the process by which a successful, caring husband and father evolves in Darwinian fashion into a brutal prison gang leader.

In the meantime, the tall (6’2”), handsome Danish actor is preparing for the eighth and final season of Game of Thrones where his formidable character Jaime Lannister will be part of the bloody mayhem that has turned the epic TV series into a global pop culture phenomenon.

In conversation, the 47-year-old Coster-Waldau is delightfully affable and earnest as he talks about Shot Caller, family life, and how GoT has irreversibly changed the course of his acting career.
He has previously earned rave reviews for his work in Oscar-winning Danish director Susanne Bier’s art house drama, A Second Chance, and for 1000 Times Good Night in which he played opposite Juliette Binoche.

Coster-Waldau lives on the outskirts of Copenhagen with his Danish actress wife Nukaaka, a former Miss Greenland, together with their two daughters.

Nikolaj, how do you get into the head of a man who is transformed from normal citizen into a hardcore prison gang leader?

It’s a very tough world that he gets thrown into, but I found myself being able to identify with his predicament. You try to think of how you would manage in that climate of constant fear and threat of violence. I would like to believe that I would be able to survive and maybe take a different direction and make different choices. But who knows how you behave under conditions of extreme danger and fear?

I’ve never been in prison and I
can’t know what it’s really like to spend years inside such a place, but
I spoke to several ex-cons and tried to understand as much as I could about that kind of experience. Then you have to simply use your imagination and try to think of situations in your own life where you may have felt that level of fear and then try to bring that to the character. 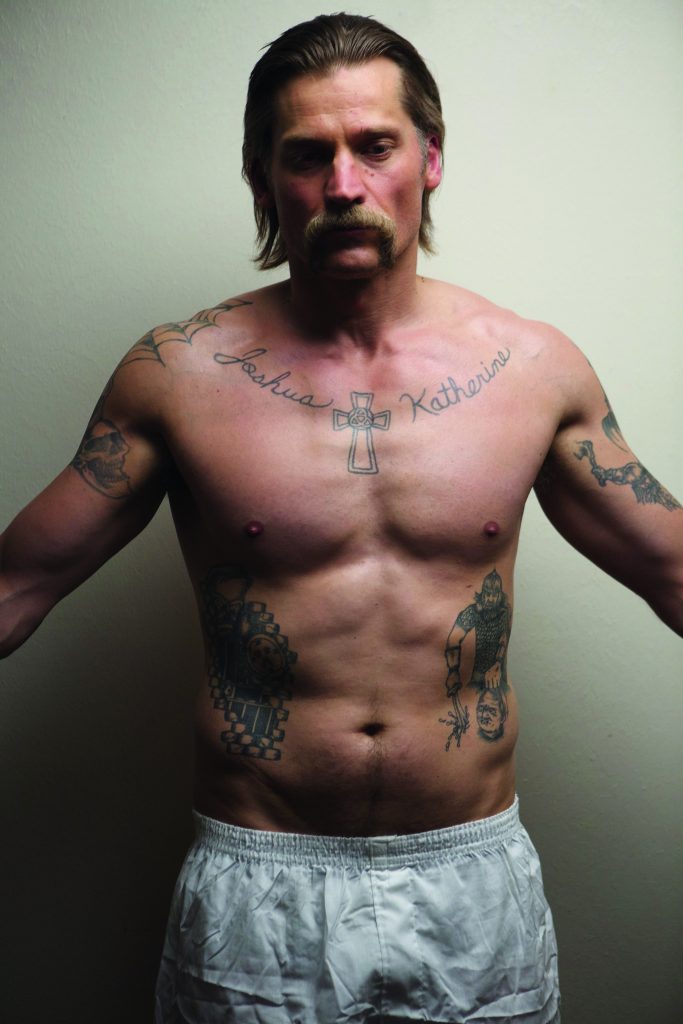 How does Jacob handle his predicament?

He does exactly what he needs to do to survive. He becomes part of the culture of violence because that was his only viable choice. He has to become violent to win the respect and protection of those (white supremacist gang members) around him.

What we see though is that there’s a price to pay for allowing yourself to become violent and allow those violent instincts inside us to take over. We all have that capacity and Jacob believed he had no other choice but to adapt that way.

Did you visit any prisons as part of your preparation?

Yes. The thing I noticed right away is the sense of menace. You can smell the fear in a prison. Everybody is constantly watching everybody else. The most important thing in that environment is respect. Everything else has been stripped away from you and the only thing you have is respect. And the worst thing you can do in prison is to show disrespect for someone.

Did you have any fear when it came to playing such a character and undergoing that kind of violent transformation?

No. As soon as I read the script I was blown away. As an actor, I’m interested in what it means to be human. In this film, you see how in the American prison system people are treated like animals and when they come out 70% of them will
re-offend and commit even worse crimes.

America is the richest and most powerful country in the western world and yet it imprisons more people per capita than any other western country. The system needs to be totally reformed. You can’t just lock people up like that, throw away the key, and not care what happens to them under such extremely violent conditions. 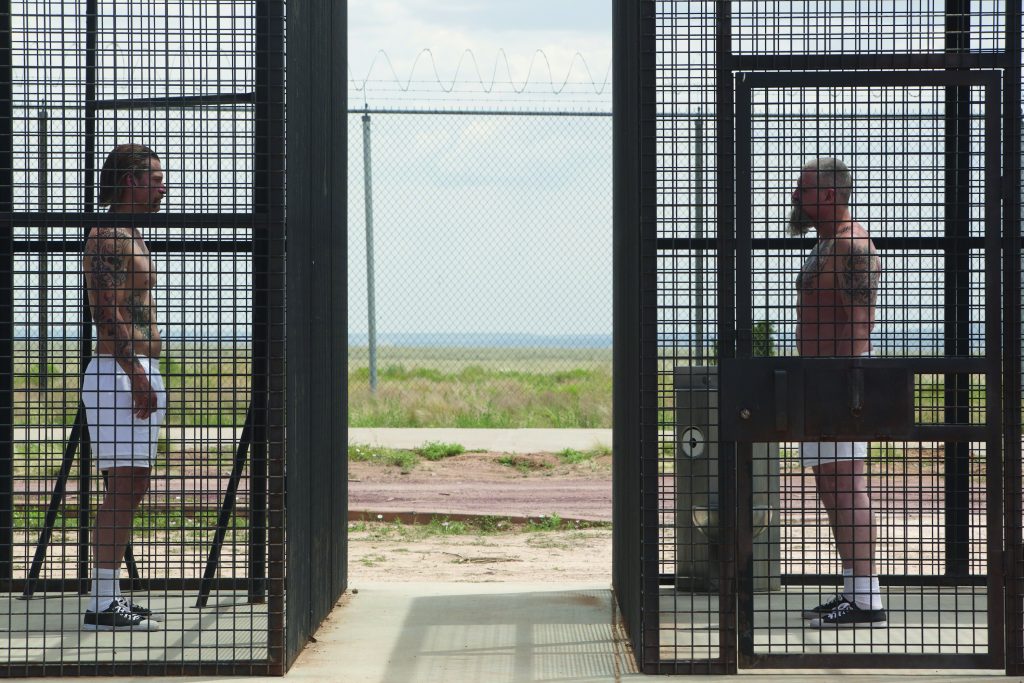 What kind of training did you do to bulk up and have that very muscled and toned look as a convict?

You eat a lot. I gained 20lbs for the film and now I can tell everyone that I’m The Rock’s body double! (Laughs) It’s mainly a diet of meat, more meat and lifting weights and doing a lot of very tough exercises.

I learnt this one very tough exercise after meeting some ex-cons. It’s called a prison burpee, where you do a burpee, then a push-up while bringing your knee to your chest, then your other knee on the next push-up, and then you jump up before going back down and repeating the same thing. I’ve never done a tougher exercise than that. It’s brutal!

Does playing a character who is forced to embrace violence like Jacob affect you once you’ve finished work for the day or after the film shoot itself is over?

I’ve never used my work as a form of therapy. I’m the complete opposite of method actors who believe they need to stay inside their characters to give the best performance. This is my profession and I come and do my job and I don’t need to go on living or thinking like my character, and I would be ill if I did that for someone like Jacob who goes through so much and is a very changed man once he leaves prison.

I switch off pretty easily although while I’m shooting a film I’ll still be thinking about the story and preparing for the next day on the set. But I’m thinking as an actor, not as the character, which is much easier! (Laughs)

What are your thoughts now that Game of Thrones is winding down to its eighth and final season? Do you ever worry about how people will tend to forever associate you with the role of Jaime Lannister?

It’s been a long journey but it took me 20 years to get a part like that and I’m very grateful. I’m not worried about what’s going to come after because I did a lot of movies before GoT and I’ve still been able to do smaller films during my time on GoT, like Shot Caller and A Second Chance and a few others.

I also know that a lot of the other work I’ve been doing is because of the stature that has come with working on GoT so I’m never going to complain about having such a great role on a massive series like that. I’m very thankful. 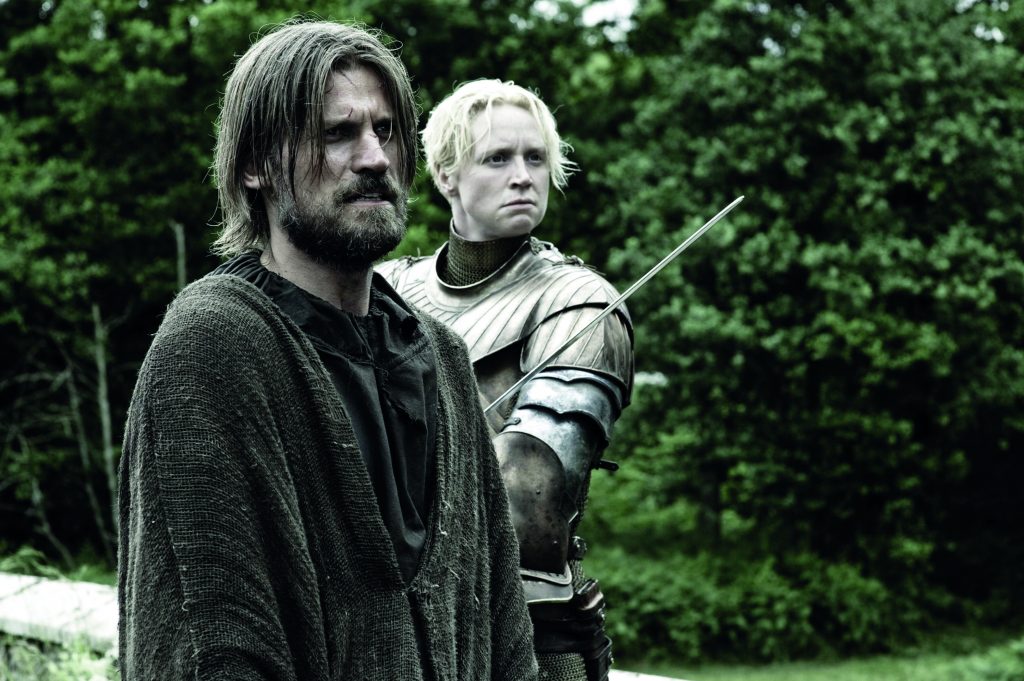 Is it ever a strain on your family life to be away for long periods while working on GoT or on other films?

Of course, it’s difficult sometimes to be away from my family but they understand the nature of my job and accept it. I don’t consider it a sacrifice. Acting is my passion and I do it because it’s something I’ve always been drawn to. My wife and my children understand that, and we still have a very strong and close life.

Does your fame from GoT catch up with you when you’re back home in Copenhagen?

It’s not a problem in Denmark. Danes aren’t interested in movie stars the way people are in New York or London. In Spain, people are crazy about the series and always wanting to take selfies.

Celebrity is a weird thing. I don’t really allow myself to feel like I’m part of that world even though it’s very flattering. It’s always good to know that people appreciate your work but you shouldn’t let it inflate your sense of who you are. I’m an actor. I’m not doing anything to save the world!

Tags:
Previous Article
Fit Brits? 20% of the population are now obese
Next Article
MIND OVER MATTER