Dermot O’Leary – The Man With the X Factor

Dermot O’Leary – The Man With the X Factor

Ever wondered how Dermot O’Leary maintains such a polished persona on our TV screens? Well, while Simon Cowell’s moisturiser might have a small part to play, the immaculately styled host is more likely to thank a combination of clean eating, a dedicated exercise and good old-fashioned hard graft.

He may delight millions every Saturday morning on his BBC Radio Two show with his caramel voice and penchant for ear-friendly guitar music, but Dermot O’Leary does not have a face for radio. With rugged good looks and muscular physique, the charming 44-year-old multi-platform presenter takes his well-being seriously. And if over two decades in show business has taught him anything, it’s that image is everything, especially in an era where those tuning in are more demanding than ever.

“Certainly, as a competitive environment it’s much crazier than it ever was,” he begins. “There are so many different options for viewers these days, but I like to think I have always sided myself with projects that are tasteful, interesting and, more than anything else, entertaining. And keeping in good shape away from work is central to me maintaining my thirst for new projects.”

But for O’Leary, fitness isn’t just about looking good. It is an essential requirement when tasked with the rigours of doing live television. Whether one-off events like Sports Relief, the Brits and the National Television Awards, or demanding weekly contracted appearances on shows such as X Factor, the Essex-born star is relied upon to be a thrumming pulse of energy, bringing excitement and pizzazz in even the most tedious moments of light entertainment. 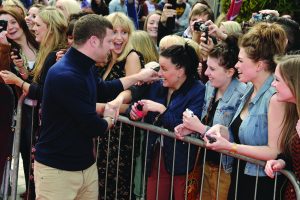 For his heralded return to the X Factor in 2016, O’Leary was determined to get in the shape of his life and embarked a strict workout and diet regime. Having often expressed his ardour for outdoor water sports, including fishing, surfing and body boarding, the O’Leary began a brutal swimming regime at the now-closed King’s Cross Ponds, followed by an hour
of dry-land cardio. This gruelling two-punch workout is a sure-fire way to burn fat fast, as the cooler temperature of the outdoor water boosts circulation and metabolism allowing for extra calorific burn right through the follow-up workout. On top of this he also plays football once a week and regularly goes running.

Dermot has also done more than his fair share for charity initiatives with exercise at their core. He has run the London Marathon on numerous occasions (on his third attempt in 2005 O’Leary completed it under four hours for the first time) and, having proved his athletic prowess, now commits himself to more light-hearted, though not necessarily less demanding, endeavours.

In 2012 the loveable star completed Bath’s half marathon dressed as a breast in honour of CoppaFeel!, the breast cancer awareness charity of which he is a patron. And in 2015 he raised a phenomenal £650,000 for Comic Relief after completing a 24-hour dance marathon, declaring afterwards, “I never want to dance again”.

“It’s a weird thing when you get involved with a charity, because for the most part you just turn up and have your picture taken,” he says. “I did that for a long time and quite often I’d go home and, not feel hollow necessarily, but would sense that I wanted to do a bit more.”

Naturally, balancing a busy career with athletic ambition requires fuel, so O’Leary eats heartily but clean, consuming plenty of fruit and veg, slow-burning carbohydrates such as porridge and sweet potatoes, and a good spread of lean protein including chicken breasts and yoghurt. He also admits to enjoying the odd glass of wine – but given his Irish heritage, who could deny him that, particularly when accompanied with his favourite foodstuff of all, fish.

In fact, so fond is O’Leary of our finned friends, he opened two restaurants devoted to them in Brighton and Poole. Aptly named Fishy Fishy, the menu had a strong emphasis on sustainability and local produce, and while both restaurants have since closed their doors, O’Leary looks back fondly on his stint as a restaurateur, insisting he is always receptive to new ideas. “Variation is key for me. Like most people, I’m interested in so many different things, and I never lose sight of the fact I’m lucky enough to explore these in the public domain.

“No matter what I’m doing professionally though, exercise is always the staple I come back to. It’s addictive, makes me feel so good and actually increases the energy I have for work, rather than decreasing it.

“Exercise also forces me to hydrate, and I readily feel the benefits of that. I’ve always got a bottle of water with me and I think everyone should have – it’s so important.”

At 44, O’Leary still maintains the boyish demeanour that made him so captivating when he first graced our screens as a T4 presenter back in the late nineties. Given the huge amount of pressure on celebrities to appear young, you couldn’t blame the presenter if he had succumbed to the odd bit of plastic surgery (like perhaps some of his X Factor peers…) but O’Leary credits his glow to a dedicated skincare routine. Starting the day with an invigorating scrub, he applies moisturiser along with a skin serum, finishing up with eye gel. He insists that the secret is the quality of products, and sticks to three very reputable brands: Kiehl’s, Elemis and Clinique.

He also has a reputation as one of Britain’s most stylish men to uphold – as dictated by GQ who regularly feature him on their ‘50 Best Dressed Men in Britain’ list – maintaining his own brand of ‘on duty’ suave (impeccably tailored suits often in shades of dark blue) combined with a more relaxed polo neck and black jeans look when he’s not on screen. But given the success of his Saturday morning breakfast show on Radio 2, could he ever be tempted to make the leap permanently to the airwaves?

“I think radio is an incredible medium and it has always excited me. It’s a very different creature to TV – I don’t have to dress up for a start – and it does fascinate me. But I’m in no hurry and am just looking forward to seeing what’s around the corner. I’ve just launched my children’s book (Toto the Ninja Cat and the Great Snake Escape) and that’s been such a great experience, so I’m keen to keep all options open.

“What radio offers emotionally is actually very similar to doing a long run. At the end you’re filled with elation, you’re buzzing and the sense of relief and satisfaction coarses through you… but at the same time you’re ragged, perspiring and desperate to stay away from watching eyes. They’re two very similar things!”