Defining Mo Farah should be easy – he’s a runner; that’s his job. Trainers on, an energy drink, a smearing of Vaseline perhaps… beyond that, it’s just a case of running around a track, isn’t it? Right? Not quite…

The fact Great Britain’s most successful middle-distance runner will argue the reality is slightly more complex is no surprise. Yet as we present to the popular 34-year-old the reality that, excuse the lazy reverse simile, his job is not rocket science, the athlete responds with a nod and a moment of clarity. You see, away from the training, the diet, the relentless strain on a chiselled and seemingly weightless frame, not to mention the psychological might needed to defeat opponents before they’ve even started, Mo’s day job is nothing more than a bit of acceleration here and there. “When you put it like that, it does seem very easy,” he admits laughing. “I wish I’d thought of it like that.

“Actually, when the gun sounds and I’m racing all I want to free my mind of everything and let my body perform… and yes, there is absolutely no surgery going on!” 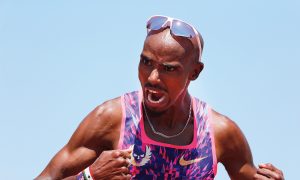 ‘Starting All Over Again’

Our objections to Farah’s talent are all in jest of course. A more driven, powerful and committed athlete you will not find; and for someone who has been at the peak of his professional powers for over 15 years, there’s an agelessness about the Mogadishu-born superstar.

While approaching their mid-thirties many athletes begin contemplating life away from the competitive arena, Farah’s swerving of the retirement issue is to step out onto an altogether different path together – onto the marathon course.

“Fear is what keeps me going; it’s what keeps me competitive!” he admits. “I guess I don’t want this journey to end. I know it will one day but I’ve worked so hard to put myself in this place and the only way to stay here is to keep motivated… to keep trying hard and make sure the dream doesn’t end.

“People turn around to me and say, “you’re this age and that age – this must be coming to an end soon,” but why should it? Unless it’s injuries that slow you down, I truly believe fading motivation is the one thing that brings about a decline in performance, and motivation comes from a lack of interest. That’s why I’ve embraced long distance running because it’s a completely different skillset and it’s like I’m starting out all over again. That’s really exciting.

“I think it’s inevitable to find the human mind moving itself on to other challenges in life,” he continues, “but they say you are a long time retired when something has been your entire life, and I’m definitely not ready for that just yet.”

While Farah has combined the multi-layered variances between 5,000m 10,000m and full marathon training, it’s clear spreading himself so thin has means not specialising on any, hence why winding down track exploits has become the obvious choice for a runner whose competitors over the years have come and gone without ever threatening his crown.

This year’s World Championships offered another – and penultimate – opportunity for us to admire the majesty of Mo as he once again pulled away from his rivals on the back straight in a well-rehearsed and ultimately unstoppable orchestration of finishing power. It’s a move his adoring public have come to love and expect.

“I love the feeling of being hunted down by rivals – it’s nice to be the one who’s being shot at because that makes the feeling of success even greater when you make it over the line.

“If I’m in that position with a lap to go then I know what’s going to happen. For that final kick, my body just takes over. At that moment, it feels like I have more energy than at any other time in the race. What do I put that down to? I guess the right training, and knowing that my body has something left in reserve – and a small amount of faith!”

The One To Beat

Farah is certainly in prime shape, as exemplified by a 10,000m field-destroying run in Ostrava in late June and a similarly devastating 3,000m display at the Anniversary Games in London two weeks later. And, of course, there was his dominating win at the World Championship in August.

“I’m feeling good,” says the multiple Olympic champion. “No two races are the same and, of course, every meeting brings a slightly different challenge. I don’t like to talk about rivals as really my only focus is ever on myself – that’s the way I like it. But, you know, I’ve been doing this a few years now and the names have come and gone. Of course, now it’s my turn to step aside for someone else, but even this year  I was feeling as good as I have ever done. There is still a lot more to come!”

Preparations for London could not have gone any better. “At the peak leading up to an event I will be doing between 120 and 130 miles a week,” he says, almost casually. “There are no rest days and that schedule will include one or two long runs, some fartlek training, some weights on top of cardio – usually kettle bells and some dead weights – and other trials of medium distance.

And the diet element?

“People are amazed when they hear how simple my diet is,” he reveals. “I like lots of small plates and the usual combination of pasta, vegetables, cereal, and coffee. The day is not going anywhere unless I can rely on a coffee to get me started,” he laughs.

“I’m more about really good hydration after running to ensure my body is ready to go again later in the day or the following day; but finding that good combination between carbs and protein is vital.”

Farah admits even his recovery runs come in below the six-minute per mile mark, and all under the expert guidance of Alberto Salazar and the Nike team at the company’s multimillion dollar training complex in Portland Oregon.

“It’s a great place to be and there’s such a strong concentration on focus fitness and performance. It’s always nice to come back to the UK and be with family, but being away in the States is a consequence.” 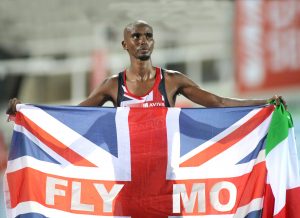 As for his immediate aims over the coming months – he admits it’s about positions, not times.

“Times don’t matter too much to me – it’s about winning even though I’m swapping the 10,000, for the marathon. Times add a bit of gloss and show, but even the slower races can be hard because you’ve invested so much in keeping the opposition away.”

And the hardest part?

“For me that’s the first part of a run. Everyone is jostling trying to work each other out. It’s easy to get clipped and only over the years have I managed to relax a bit more in the early stages, because it is a tense place to be in the pack and a lot of runners are on edge. I find the quicker I can settle into a rhythm and work out who’s around me and what their game-plans are the better I run. Really, all I want to concentrate on is my own race.”

While there are many looking to take Farah’s mantle one face emerging from the pack is Mathew Kimeli. Although the 19-year-old couldn’t halt a typical Farah final-lap burst in Ostrava, the Kenyan is the latest in a long line of challengers who would love to snatch glory from Farah.

“There’s always someone else to take on,” he muses, philosophically. “Kimeli did well in Ostrava but I knew what I had left in the tank, and as soon as I kicked I checked back to see what he had and knew then I was in the clear.

“Of course, I’m really glad to have gone out on a high, which is lucky because not everything is perfect in sport.”

Don’t Be A Typical Runner. Be Amazing.
f

Don’t Be A Typical Runner. Be Amazing.