Out and About
Tags: Absail, Abseil the orbit, event, London, outdoor event 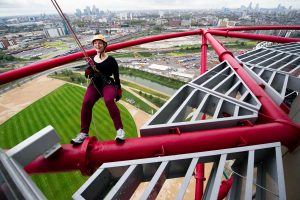 London locals, adrenaline junkies and anyone that loves heights may have already considered the abseiling potential of some of the capital’s best architecture, but have you considered venturing to the Queen Elizabeth Olympic Park? Snap up the opportunity to abseil down the one-of-kind and slightly odd-looking ArcelorMittal Orbit, also known as the UK’s highest sculpture, sitting in Stratford, East London.

On Sunday 30 April the Orbit will welcome individuals, couples, groups of friends, family and even colleagues to manoeuvre their way down it. This 262ft free abseil requires no previous experience, with on-the-day training being provided by the professionals that have organised the event. Nevermind the adrenaline rush or personal satisfaction, you’ll also experience insane views across London; look out for the Olympic Park, Gherkin, Canary Wharf and Wembley Stadium especially.

If that wasn’t enough to get you shimmying up the sculpture, this event is being held to raise funds for the Mayhew Animal Home, helping out our furry pals and their carers. Taking part requires a minimum sponsorship fee of just £250 and a registration fee of only £30; easy figures to achieve in a city like London. The charity are also offering their top fundraiser a prize – afternoon tea for two at The Balcon restaurant in the luxury Sofitel London St James hotel.

Fundraising can be done via JustGiving and all fundraisers will receive plenty of support leading up to the event, to help them raise as much cash as possible. Those that take part are welcome to bring family and friends along to watch and document the day; it’s set to be an unforgettable one.

Tags:
Previous Article
Push yourself to the limit at the Farmageddon run this May
Next Article
World’s End Cornwall and outdoor events headed your way