David McIntosh is a former Royal Marine who played Tornado in Gladiators. He wanted to test his mental and physical strength to inspire other Forces veterans, so decided to tackle the 250km Desert Ultra, one of the hardest races in the world… 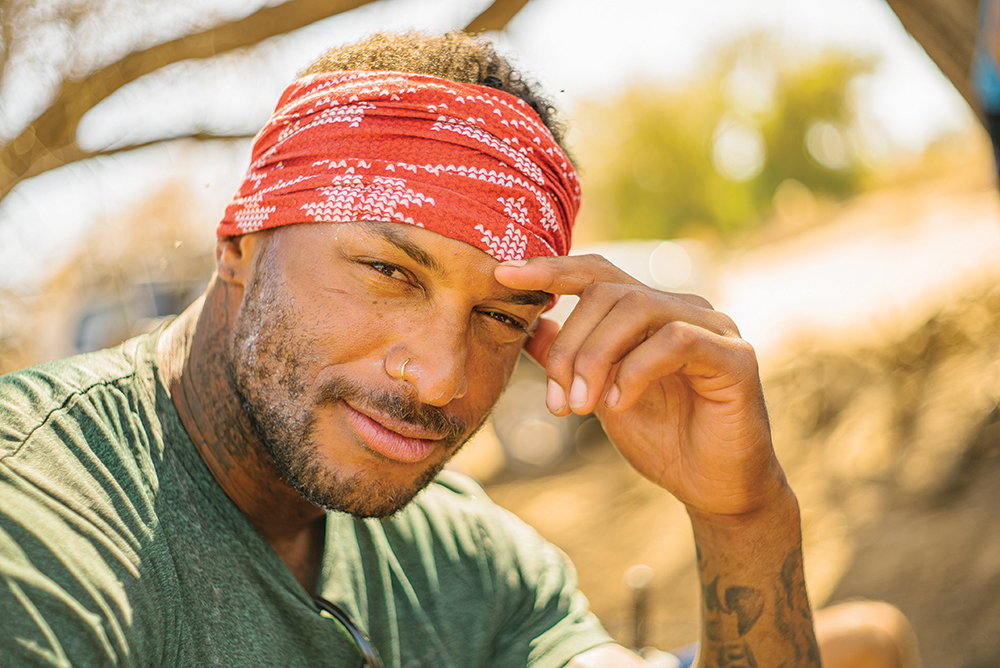 David, why choose the Desert Ultra 250km? And tell us a bit about what was involved…
It was tough, like death, but I wanted to put myself through a really tough challenge to inspire others. I Googled ‘toughest race in the world’, and the Desert Ultra forms part of the Beyond the Ultimate series of races. As well as the Desert one I did, there’s one in the jungle, one in the mountains, and another in the Arctic. It involved 45 hours of carrying 45lbs across five stages. I had to be totally self-sufficient. I was camping by myself, competing by myself. The temperature in the day approached 50 degrees and you were always in the middle of nowhere. It was brutal, and every day it broke my body down.

In what way?
The first day I went out I had to do 55km. By the time I got to the second check point I wasn’t thinking about electrolytes or anything like that, I just wasn’t really prepared as well as I should have been. At 20km I had cramp in my left leg, which I couldn’t shake off. Then I got cramp in the right. I had another 33km to go and I was wading through sand with cramp in both legs. I wasn’t just thinking about making it to the next check point, I was wondering how I would make it through the day, then the next day. If I felt this shit so early, what chance did I have? I crocodile walked that last 30km.
I was in so much pain that I actually started laughing. I had tears too. But I was in so much pain and yet I was still going, and I knew then that I would do it. I was broken, but not finished. And that was very powerful.

You had to do 100km on your last day. How did you do it?
I had burned out everything in my body, probably even gone through whatever reserves you have. I had no food, nothing, but I felt so powerful. When you’ve used up everything, you simply operate on something deep inside you. I did that for 18 hours. I started and ended that day in the dark. At the end, I simply rolled over and had a beer. That beer was the taste of success, it felt so good. There was no one there to congratulate you and while my mind was defeated and my body broken, there was a great feeling of having finished. 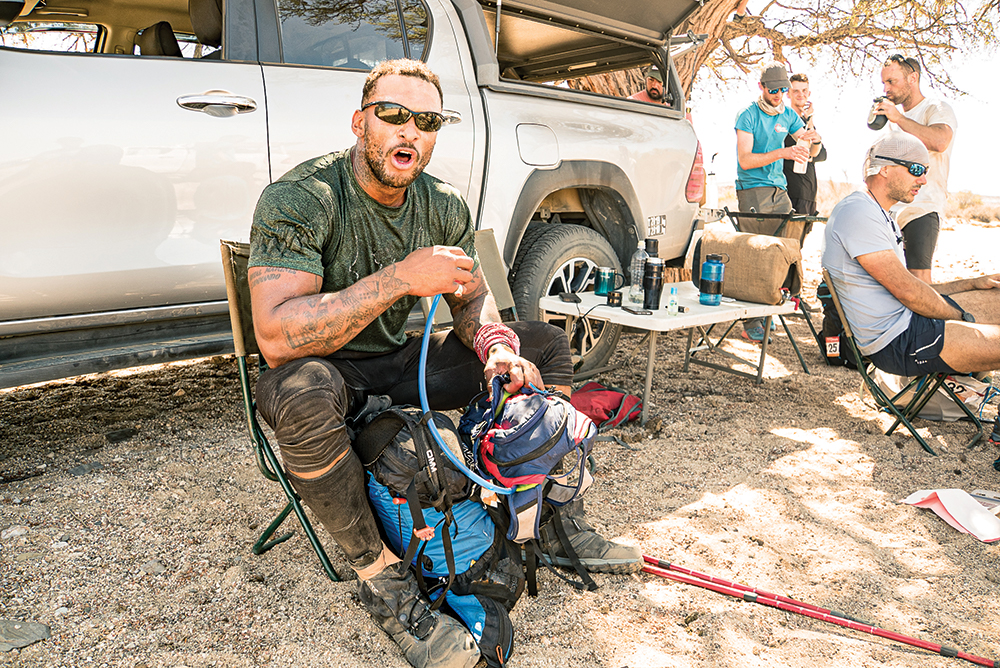 How did you sleep each night during the race?
Every time I came in at the end of the day I couldn’t walk, my ankles simply seized up. I’d lie down worrying about the next day, it just seemed impossible. I would literally crawl into my tent, have my dry rations and sleep. When I woke up, I couldn’t move my feet. The last day was the worst. I just had to break it down; 10km, 20km, 30km…

It seems more a mental test than a physical one…
It was purely mental. You know you’re going to get broken physically, but I wanted that. There was no one there to help you, only a red button on your tracker if you wanted to quit. It was desolate, 50 degrees and there were carcasses all around. There you are, in the Namibian desert, stepping in the sand surrounded by mountains. It was you against your mind.

You must have seen some others pull out?
This was my first time and I saw veterans of the event, literally the top guys who were dropping out. Injury, heat exhaustion… in the end I finished in the middle. I was surprised. I only entered the thing five months prior and was busy with work so actually only trained for about five weeks. I knew I’d never quit, but I wasn’t sure if my body could do it. I wanted to enjoy the pain. I didn’t want it to be easy.

Why is that?
It’s all about pushing yourself. I experienced that pain a lot in the Royal Marines and I’ve not experienced it since. I’ve been close to it doing other events but not had it, and I wanted that mental state. You have to go past breaking point to really achieve, going to that limit gives me power. On the first day I experienced overwhelming pain and I could barely walk through the sand, and yet I was laughing. That was the pain I felt in the Marines, and I missed it. Military guys miss that. They have it at a young age, and don’t get it again… and they feel at a loss. I needed to find it. I now motivate lads coming out of the military. I found it good going beyond my comfort zone. I felt like I was going to die, but at the same time that feeling kept me going. 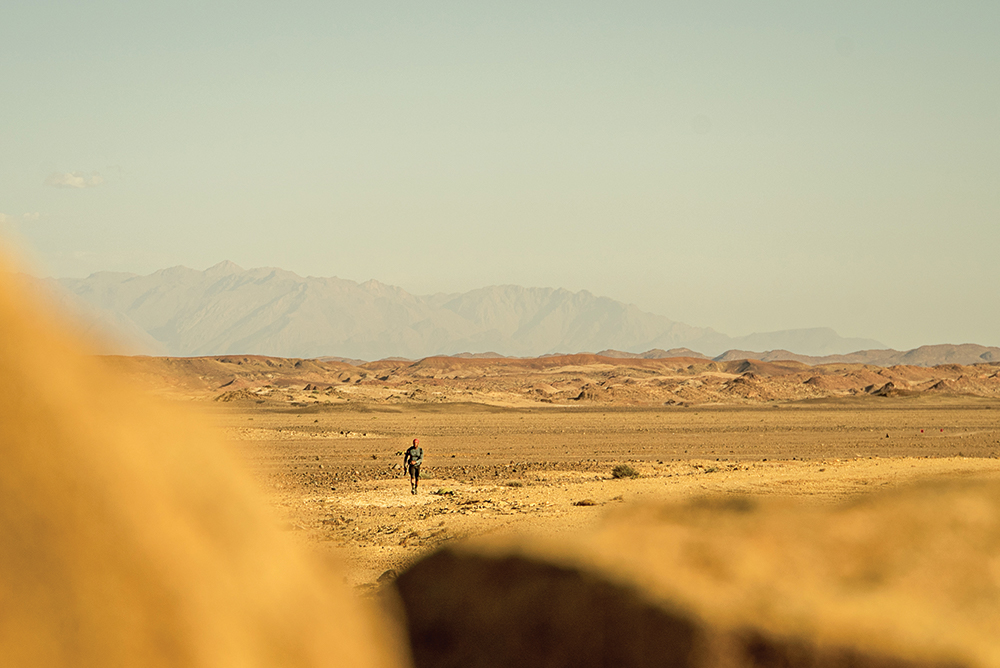 What training did you do?
I had five months to prepare but because of work I had five weeks to train. I did 50k a week, 10k a day plus hill sprints to get my mind ready and have clarity and focus. I didn’t have time to do more and while I knew my body wasn’t ready, I knew it was strong. People trained harder than me but were still pulling out.

Where does that mental toughness come from?
I would always say I’ve always had it through hardship. Fight makes you stronger. Everyone can push themselves, but you have to go through the fire and push past breaking point. As soon as you quit something, you stop developing. Keep pushing past your breaking point and nothing can stop you.

You mentioned earlier you wanted to inspire people, who, how and why?
I want to inspire people including military veterans to inspire themselves to be better. To do that I work in the fitness market as a PT, with boot camps and via Instagram training and motivational workouts. I try to inspire people through events and social media, and doing events such as this. Everyone can go harder and push themselves. You don’t need people to hold your hand.

What’s next?
My passion this year is to motivate my fellow military brothers to regain their spark for life, to empower young people with positivity. I want to show people that absolutely anything is possibly with a strong mind.