Zac Efron reveals his secrets to getting in peak physical condition as he hits the beach in the highly-anticipated big-screen adaptation of Baywatch, writes Karen Anne Overton 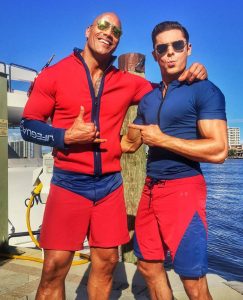 Zac Efron has come a long way since his teen heartthrob days in High School Musical when he crooned and jazz-handed his way into the hearts of pre-pubescent girls everywhere. Yet with his recent outings in films such as Mike and Dave Need Wedding Dates and Bad Neighbours – in which he plays the arrogant and vain frat leader Teddy Sanders – the once-weedy 28-year-old has beefed up considerably; washboard abs, shredded delts and general super-leanness have seen Efron successfully re-invent himself as a bona fide muscle-bound movie star.

Proving that super-buff bods don’t come easy, Efron takes an almost fanatical approach to his fitness and squeezes as much physical activity as possible into every single day. “I am pretty religious about my workouts, especially when I am filming,” he says. “I have to be. It keeps me sane. As long as I am working out, the rest of the day is downhill.” And preparation for awards shows and shirtless scenes? “A ton of push-ups, and pull-ups and dips right before!”

For this summer’s movie reboot of Baywatch – which ran for 11 series from 1989 to 2001 – Efron took his training to an extra level and got his body fat down to a rumoured five per cent. “I’ve always been pretty dedicated when it comes to staying fit and working out regularly,” he says. “But I’m not anywhere near as vain as Teddy [in Bad Neighbours]. You have to go through a lot of intense workouts and diets to get in that kind of shape.”

The California native goes on to explain that the aim was always to be lean over looking like a bodybuilder, and ‘fast and light’ for maximum, slow-mo beach-running agility.

Since it was important that Efron not just look like a lifeguard but be able to swim, run and dive like one too, his trainer – Patrick Murphy – compiled a regime that comprised a range of explosive drills designed to increase muscle mass, agility and speed. He also followed a strict low-carb and low-sugar diet and at one point admitted that he sustained himself for nine days on only “organic grass-fed/free-range protein and organic leafy greens.”

“Sometimes it was tough being on the set because you feel the strain on your system when your body and brain are craving carbs,” he confesses. “On a film like that, though, where you’re shirtless most of the time, you’ve got to maintain that discipline and regimen. But once you’ve done it, you feel a great sense of accomplishment and you want to be able to keep pushing yourself.”

While the original series took itself seriously, Baywatch the film goes tongue-in-cheek and promises to be funnier, sexier and bigger in every way. Stepping into Pamela Anderson’s famous red swimsuit as C. J. Parker is former Sports Illustrated model Kelly Rohrbach. Efron takes on the role of Matt Brody, played by David Charvet in the original, and rival to Mitch Buchannon – David Hasselhoff’s character – played by none other than Dwayne ‘The Rock’ Johnson. “It is going to be bad ass!” declares Efron. “It’s really funny and not like the original show at all. It’s just been a huge project for me and I’m so excited about it.” 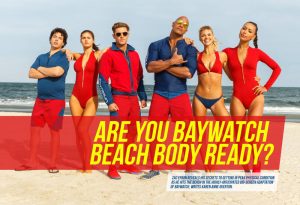 In keeping with their characters, the two handsome leads have been exhibiting a healthy level of one-upmanship both on and off the set, with shots emerging of the actors competing in bare-chested truck tyre-flipping contests and racing on an American Ninja Warrior meets World’s Strongest Man-inspired obstacle course, with Efron joking even before filming started that he was “very excited” and going to “train very hard and get ready to outswim The Rock”. Banter aside, the pair appear to have been getting on swimmingly on social media – Johnson complimenting Efron’s physique with a caption reading: “Just look at the shape he came in.” Efron returned the favour by calling him “an animal”.

Despite garnering enormous success early on with his squeaky-clean image, Efron hasn’t been without his demons. In 2013 he entered rehab to deal with what was reported variously as alcohol or cocaine addictions, but says that now he is in “the best place” he has ever been. He suggests that the time he took away from his career helped him to get healthy and change his perspective. “I’m much happier,” he explains. “I feel like I’m in a great place now and it was actually good to reflect upon that experience and realise how much I have learned about myself and the kind of man I want to be. I’ve never felt better in my life than I do now – in every respect.”

While he admits to having the odd night out, for the most part Efron is content to take it easy. “I still have fun, but I’ve changed my life a lot over the last few years,” he says. “I don’t mind leading a more boring life in that sense. I would rather get to bed early, read and relax and maybe watch a movie, and be up very early in the morning and get into my workout routine, doing weights, swimming, cardio – all of that.” He adds with a grin: “I enjoy the feeling that comes with being in good shape, and working out with The Rock has been a huge inspiration. That’s another reason I have so much respect for Dwayne – he has incredible energy and drive and has such an optimistic spirit that is truly inspiring. He’s awesome!”

Burgeoning bromances aside, there is one other male figure in the actor’s life who has always guided him and inspired him to be better: his father, David Efron. “My dad taught me and my brother to be very serious and disciplined at whatever we did,” Efron says sincerely. “It definitely made me tougher in terms of being more ambitious and not giving up. That kind of motivation is at the heart of whatever success I had at an early age and that same spirit still keeps me wanting to push myself harder than ever.”